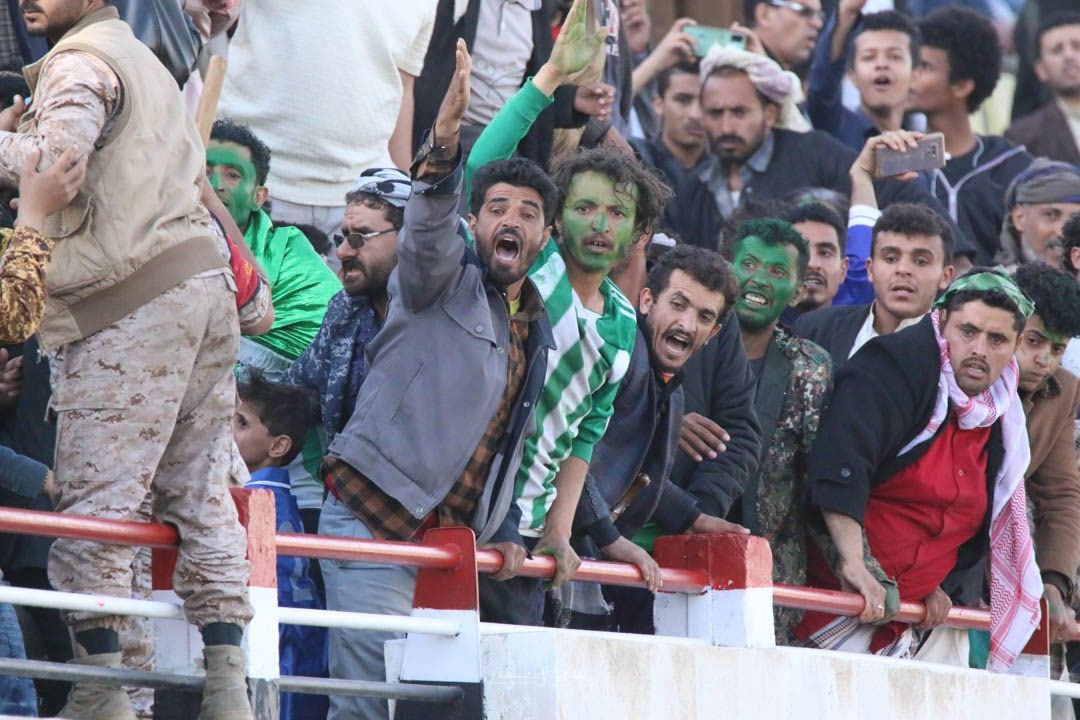 Should footballers wear bulletproof sweaters instead of leg protector?

After more than six years of complete inactivity, the Federation of Yemeni Football Association (YFA) waked up and announced the resumption of sports contest (general football tournament), expected to start mid this September for 14 teams.

This delayed awakening could have disastrous results, forcing the teams to run races in the two southern cities of Seyoun and Shabwa and to move from northern provinces amid fierce battles in different areas, in addition to some recent developments.

The YFA chose the two cities, despite the fact that the two main cities (Sana'a and Aden) are prepared, to host the tournament and take the competition out of the bottleneck. But the YFA uncalculated decision could lead to huge catastrophe (Allah forbid), particularly with "public" escalation expected in the south against the YFA.

With its term expired since 2018, the YFA caused deep crisis following the announcement of the contest resumption; as it breached its statute and interfered in the authorities of the Ministry of Youth and Sports (MoYS)by freezing the activities of three of Aden-based clubs (al-Mina, al-Jala and Shabab al-Mansoura).

The freeze was based on decisions taken by Aden MoYS office to change managements of the three clubs, irritating the leaders of the game association, since the 3 clubs are supported by the current chairman who intends to run his fifth term. His intention comes despite that he and his board of directors violated most of the statute's articles on managing the YFA, amid strange silence on the part of the continental and international federations. 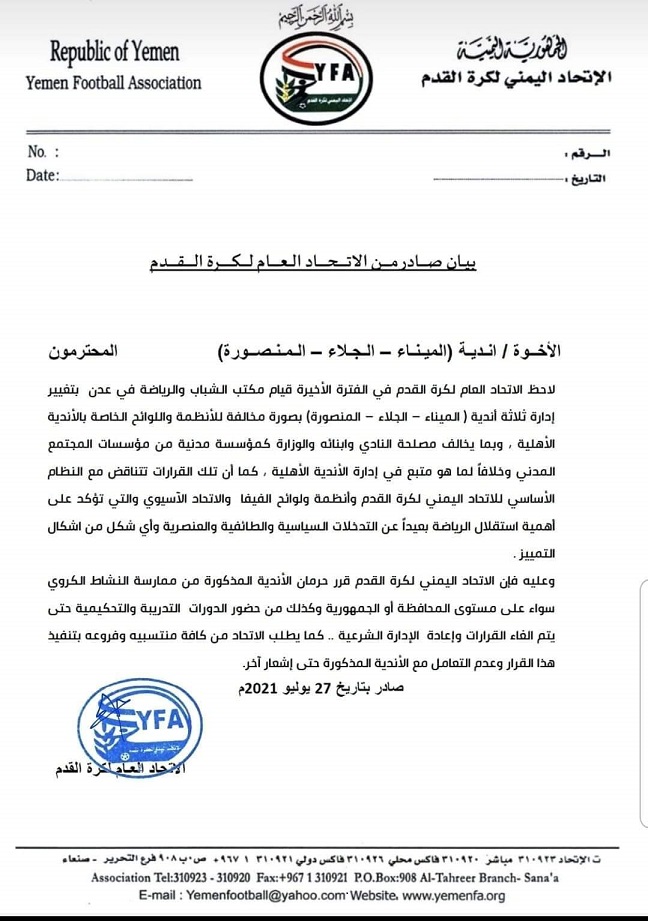 After the YFA "illegal" decision to freeze the three club's activities, Aden city-based clubs hold a massive meeting that concluded with a declaration rejecting the YFA interferences in MoYS-governed clubs and calling on the YFA chairman to reverse his decision and to respect the regulations that provide for clubs' independency.

With the YFA overlooking their first declaration, the clubs issued a new declaration through which ten of Aden-based clubs chose to boycott any of the YFA activities, including all the general tournament's levels. 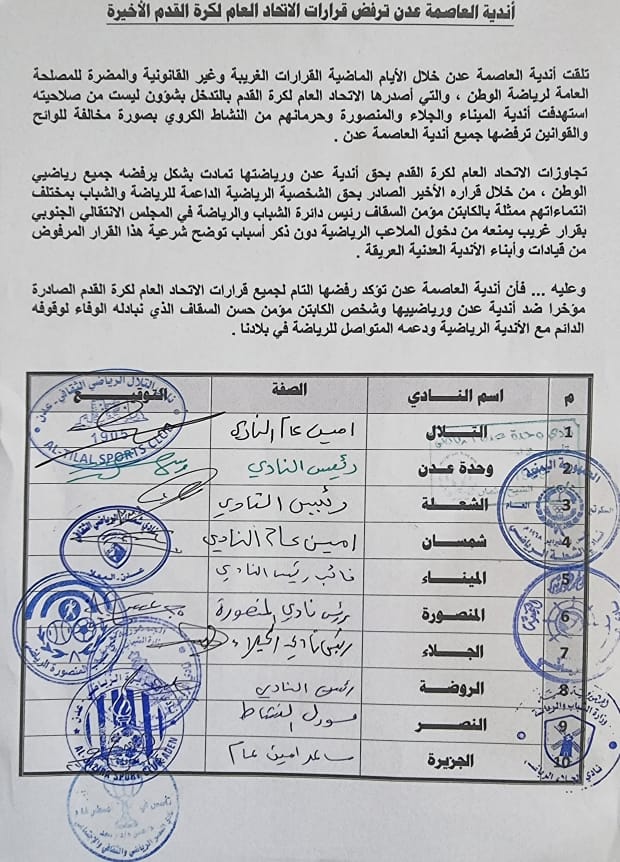 Three of the clubs that singed the declaration (i.e. al-Tilal, Wahdat Aden and al-Shou'ala) are active in the football supper-league tournament and had long history in Yemen's football. The other seven clubs are involved in different lower levels of the general tournament.

"We tries to find out a judicial solution according to the statute, but the very YFA breached Article (64) on the formation of a body to arbitrate disputes – including from legislative authority – and limited all the decisions to the general secretariat in consistence with personal desires," he added, citing the absence of the legal provisions on which the YFA based its decision to freeze the three clubs' activities.

"The clubs will head for the FIFA, or even the CAS, to reveal all the financial and administrative breaches by the expired YFA, which is now a political rival to the national clubs, and this is evident in its decision to freeze the three clubs' activities with no legal basis," the source said on condition of anonymity. 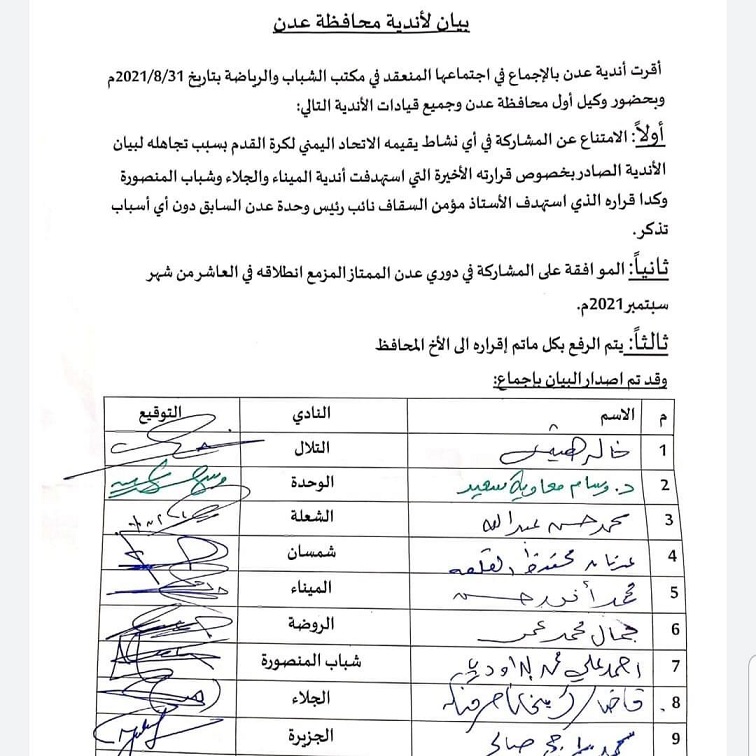 I and all the followers know the position occupied by Aden three clubs (al-Tilal, Wahdat Aden and al-Shou'ala)against which the YFA signals to take severe decisions – including degradation – following their refusal to participate in the expected tournament.

It is not a secret that such a decision would rouse resentment of southern sports audience, whose reaction against other clubs participating in the contest cannot be controlled. This could further fuel security snags already seen by the two cities between political rivals, in addition to the recurrent appearance of radical groups (like al-Qaeda) in one of the two hosting cities.

Despite all these tokens, it seems strange that the YFA is determined to operate the contest under the ongoing system, before defusing the tension it flamed in Aden for electoral purposes that it is very early to talk about.

To conclude beyond any exaggeration, I put hereinafter a set of questions that need clear answers from relevant officials, on the basis of moral responsibility, while we became unable to convey our and Yemeni sportsmen's voices to bodies in authority.

Would footballers wear bulletproof sweaters instead of leg-protectors during their presence over two months at the edges of the country? Who would bear criminal responsibility if any adversity occurred (Allah forbid) due to the current situation?

Are the FIFA and AFC officials aware of the ramifications of starting a tournament by which YFA seeks to withdraw financial support unpaid for five years, despite all the security fears in violation of FIFA rules regulating football contests and providing for footballers' safety?

Will the YFA be responsible for its decisions sparking a sports crisis to use it for political purposes and then kick off a tournament amid all the obvious fears that can only be overlooked by an idiot unaware of the situation?

Do the Yemeni clubs' managements (that agreed to send their footballers to the country's farthest part) have security guarantees for the safety of players supporting hundreds of families? Or the 10,000 dollars gifted by the YFA for participation would remedy any potential damage? 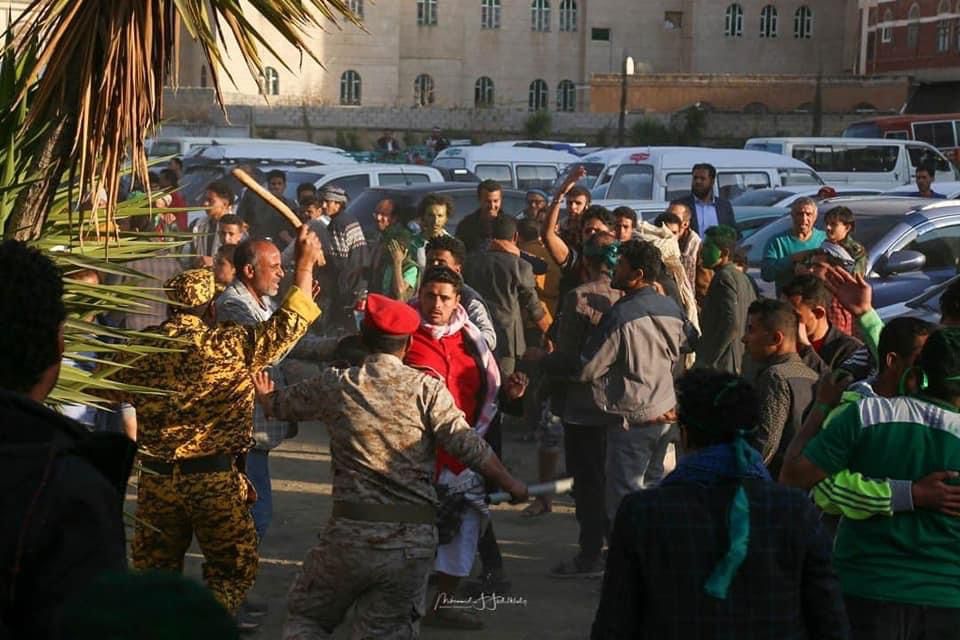 I still remember the blast of a Somali team's bus while writing this article. I thus warn the YFA and all the relevant bodies of running the tournament in conditions they know well, particularly after the YFA recent escalation. I hope the wise officials in the Yemeni sports field will listen to reason, solve the issue swiftly and stop direct interference in clubs that are under the authority of MoYS and its provincial offices.