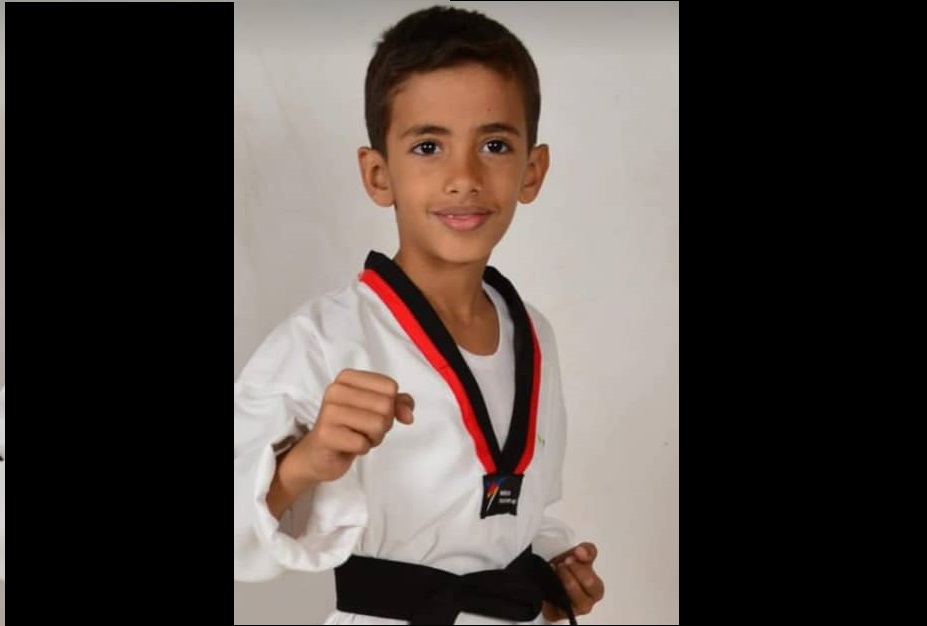 For seven years, the Yemeni sports has suffered miserable reality due to a war seen by large swaths in the country – with no political or military solution in sight – between rivals fighting over power, according to UN.
While the war left huge destruction to infrastructure in most of the cities and claimed tens of athletes' lives in fighting fronts, yet its largest damage was the wider ring of corruption in sports structures and institutions.
Following this war, the change circle through ballot boxes stopped, placing athletes in dilemma, as people in charge of federations expanded their own terms (routinely) throughout more than nine years.

In fact, the Yemeni sports all over a century has never experienced this systematical corruptions currently plaguing its fiscal and administrative aspects, amid absolute absence of general assemblies that – if any – are politically divided between warring parties in northern and southern parts of the country.
Unprecedented decline
"The ongoing corruption in Yemen's sports needs an urgent surgical intervention by the international Olympic committee," says Abdul Malik al-Jarmouzi, a Yemeni sport reporter.

The state of war and no-war lived by Yemen gave "corruption leaders" a leverage and grasp over the State's junctures, including all the sports structures, with no control exerted by higher authorities – i.e. the general assemblies of sports entities, he added in remarks to 'Super1' magazine.
Jarmouzi highlighted the need for the role the general assemblies should play in holding all the federations accountable for the severe decline in their activities over years, and for altering some sports structures into private properties virtually run by one or two persons beyond institutional work.

On the 24th of last August, the writer received certain information that the Yemeni taekwondo federation's secretary-general, SG Khaled al-Arasi, was involved in an administrative scandal in relation to a Yemeni young champion's participation in an international contest.
Having verified documents and a tape of the man's voice, the writer posted this tape on Facebook, arousing a broad anger in social media.
In the tape, Mr. Arasi threatened Malik, father of the young champion (Mohamed), to cancel his son's participation if he (the SG) is not in the delegation accompanying the child to the competition.
"Today I'll send a letter to the Estonian and European federations that: I don't have a player with this character.. This player is falsifier, and made everything through forgery," the SG told the father in the tape dubbed by most of athletes concerned as direct threat.
Hours after being posted, the leaked tape attracted broad attention on social media in Yemen, waiting for a tangible reaction from relevant authorities, the game federation along with its general assembly, the Yemeni Olympic committee, and other stakeholders.

The story started on 27 July, when the Yemeni taekwondo selected the young hero, Mohamed Malik, to participate in Estonia international contest as qualifiers for the World's young championship.
According to a letter initialed by SG Arasi and addressed to the sports minister in Yemen's official government, Naif al-Bakri, the delegation would include the player, his trainer and an official.
Following the federation letter, the sports ministry instructed the Aden-based young care fund (a fiscal pool funding sports activities south and north Yemen) to release payments for the participation.
After a set of administrative routines and a shuttle trip between Aden and Sana'a, the player and his father (who travelled at his expense) arrived in Cairo in their way to Estonia to take part in the competition. 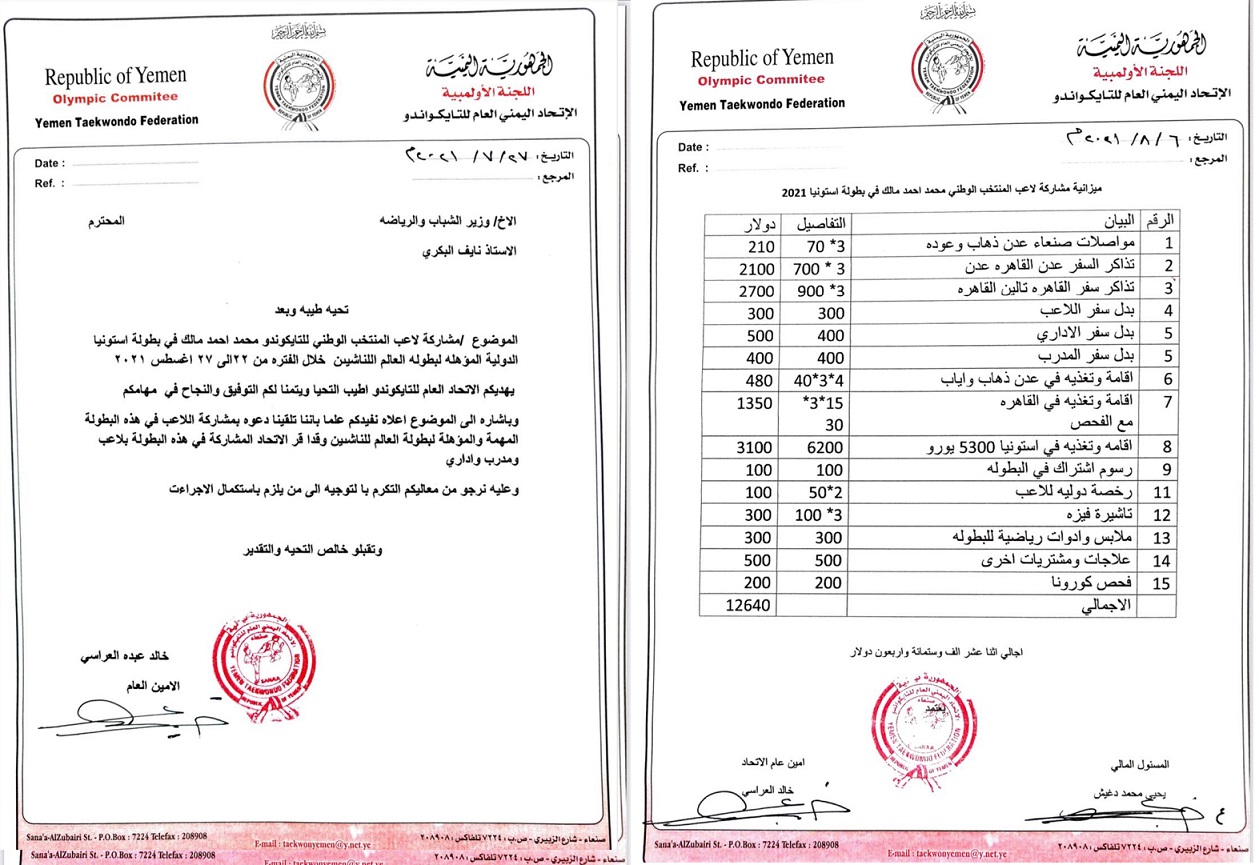 Following the taekwondo federation SG's (documented) threat, Estonia embassy in Cairo turned down an application for visa for Mohamed Malik and his trainer to participate in the contest, with a complaisant gesture by one of the mission's officers who took photo with the child.
According to the father and a memo issued later by the sports ministry, the Estonian embassy's apology was based on an email from the Yemeni taekwondo federation reading: "Participation of the child Mohamed Malik was cancelled, since the player does not represent the federation."
As a result, "my son sustained an emotional shake and was admitted to hospital in Cairo," the father told the writer. "We had no hand in cancelling the trip of the federation SG, who wanted to travel with us as an official. The cancellation came from the Aden-based sports ministry.. in accordance with its regulations." 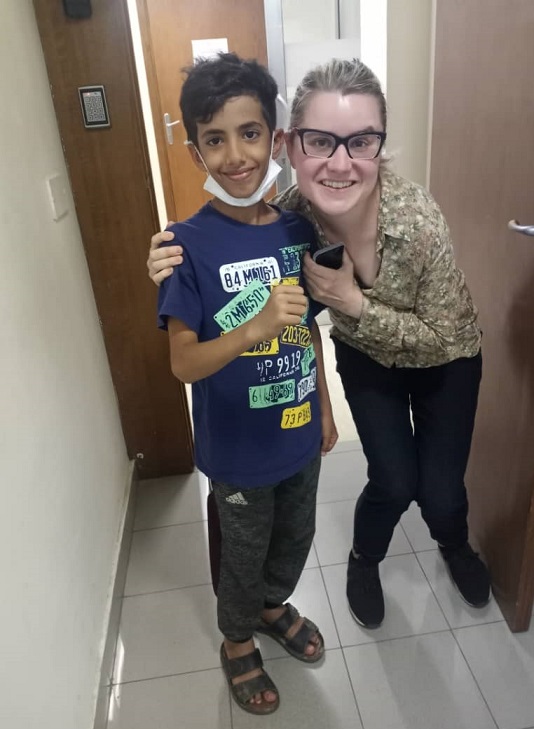 Attempts to reverse scandal
The sports ministry tried to correct the grave mistake made by the federation, ministry's undersecretary, Muneer al-Wajeeh, said in sound messages obtained by the writer.
"The taekwondo federation should correct the mistake it made, otherwise the ministry will have to stop dealing with the federation," the ministry's second-in-command said.
In one of the messages, undersecretary Wajeeh asked the officer in direct charge of sports federations (including taekwondo) to manage the issue, as the player was chosen by the federation and such contests represent Yemen and cannot be subject to personal moods.
Despite all the attempts made by the ministry, the child was not able to represent Yemen in that competition, due to the irresponsible action by taekwondo federation's SG, who made the participation conditional to his travel with the player as an official. 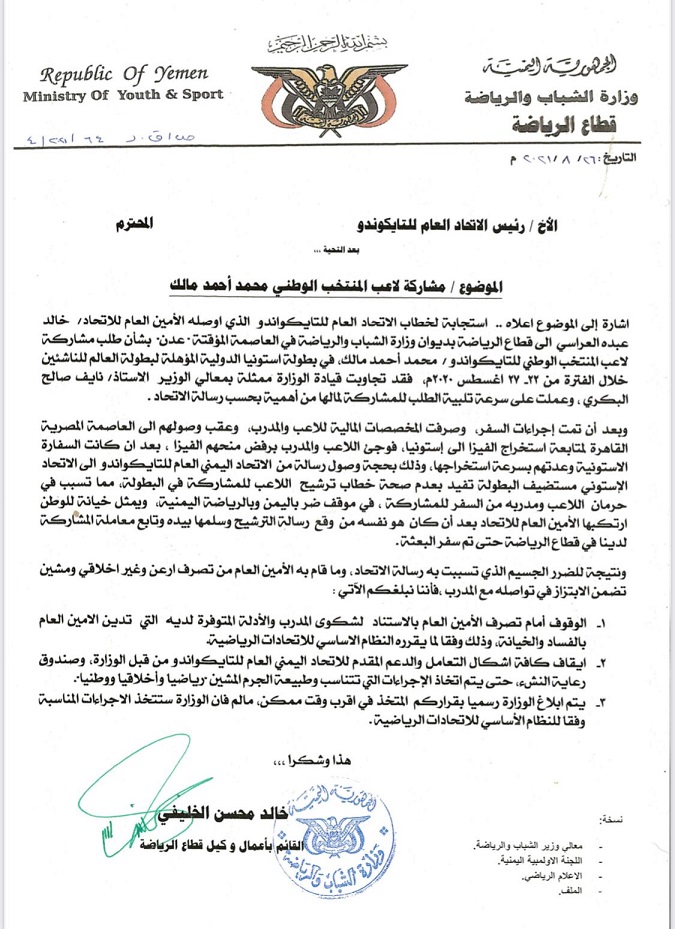 Under their statutes, Yemeni sports federations may not be held accountable by the sports ministry, even in cases of suspected financial or admin corruption, although these federations are affiliated to the Yemeni Olympic committee.
The ministry chose to give the taekwondo federation full chance to probe the matter and hold the sinner accountable, unless it will have to engage in direct clash with the federation as stated in its statute, the ministry deputy said.
So far, the federation made no response to the ministry's memo, neither it commented on the event, with some sports observers seeing this silence as an attempt to send the issue to shelves.