Aubameyang on target as Gunners return to winning ways 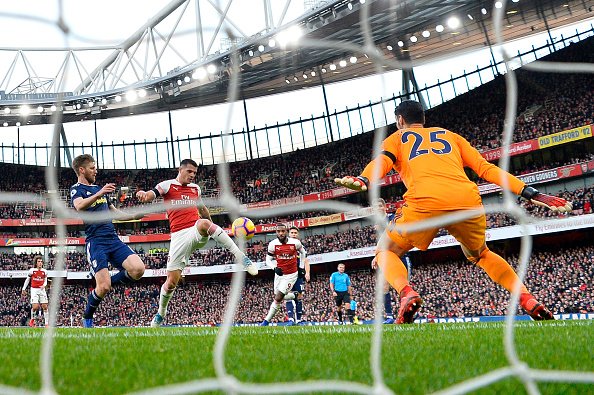 Pierre-Emerick Aubameyang moved clear of Mohamed Salah in the scoring charts as Arsenal eased past Fulham on New Year's Day.
Arsenal started 2019 with a morale-boosting win following their hammering at the hands of Liverpool, recording a 4-1 triumph over struggling Fulham at Emirates Stadium.

A visit from the Premier League's 19th-placed side offered welcome respite for the Gunners after their 5-1 reverse at Anfield, though they did not have it all their own way before Granit Xhaka's 25th-minute opener.

The recalled Alexandre Lacazette doubled the lead early in the second half before Fulham hit back with a tap-in from substitute Aboubakar Kamara after 69 minutes.

However, it was another replacement who finished off Fulham's hopes of picking up a point, Aaron Ramsey converting a rebound after Pierre-Emerick Aubameyang had hit a post, though the latter did go on to score his 14th league goal of the campaign.

The final scoreline flattered Arsenal, who papered over the cracks in their defence by scoring two late goals.
Ryan Sessegnon twice wasted opportunities to put Fulham in front, missing the target with a curling left-footed shot when clean through before failing to make any contact at the back post when picked out by Andre Schurrle's inviting cross.

The let-offs allowed Arsenal to open the scoring instead, Xhaka's run from deep seeing him control Alex Iwobi's cross on his knee and steer a left-footed volley beyond Sergio Rico.

Fulham's Spanish goalkeeper denied Lacazette late in the first half but could do little to prevent the French striker capping off excellent work by Aubameyang and Sead Kolasinac 10 minutes after the break.

Sessegnon's low cross allowed Kamara to make amends for his penalty miss last time out against Huddersfield Town, the forward having defied team orders to take the kick in a 1-0 win, but Arsenal overcame the wobble to ease over the line.

Ramsey restored the two-goal cushion and Aubameyang added another four minutes later, his drive taking a deflection to beat Rico and put him one clear of Mohamed Salah in the scoring charts.