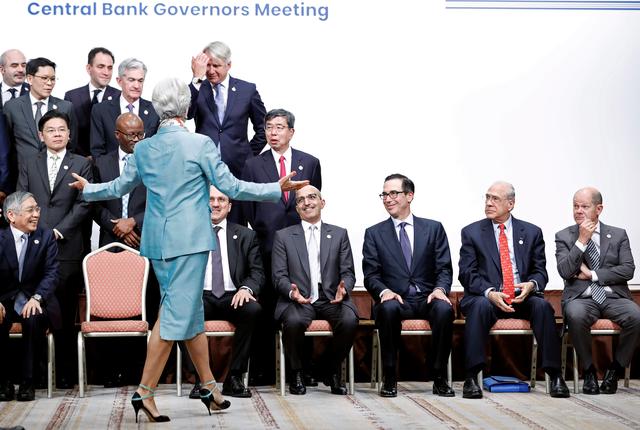 Group of 20 finance leaders on Sunday said that trade and geopolitical tensions have “intensified”, raising risks to improving global growth, but they stopped short of calling for a resolution of a deepening U.S.-China trade conflict.

After fiery negotiations that nearly aborted the issuance of a communique, finance ministers and central bank governors meeting in southern Japan repeated tepid support for a rules-based multilateral trading system.

“Global growth appears to be stabilizing and is generally projected to pick up moderately later this year and into 2020,” the G20 finance leaders said in a communique issued as the meetings in Fukuoka closed.

“However, growth remains low and risks remain tilted to the downside. Most importantly, trade and geopolitical tensions have intensified. We will continue to address these risks and stand ready to take further action.”

It also said that G20 finance leaders had agreed to compile common rules by 2020 to close loopholes used by global tech giants such as Facebook and Google to reduce their corporate taxes.

The communique also contained pledges to increase debt transparency on the part of borrowers and creditors. Another priority is sustainable infrastructure development, an issue brought into sharper focus by concerns that China’s massive Belt and Road infrastructure drive was saddling poor countries with debt they can’t repay.

However, the final language excluded a proposed clause to “recognize the pressing need to resolve trade tensions”, which was dropped from a previous draft debated on Saturday.

The deletion, which G20 sources said came at the insistence of the United States, shows a desire by Washington to avoid encumbrances as it increases tariffs on Chinese goods. The statement also contains no admissions that the deepening U.S.-China trade conflict is hurting global growth.

The IMF this week warned that, while growth is still expected to improve this year and next, the U.S.-China tariff war could cut 0.5 percent from global GDP output in 2020, about the size of G20 member South Africa’s economy.

U.S. Treasury Secretary Steven Mnuchin on Saturday said he did not see any impact on U.S. growth from the trade conflict and that the government would take steps to protect consumers from higher tariffs.

Mnuchin met People’s Bank of China (PBOC) Governor Yi Gang on Sunday in the first meeting of high-level U.S. officials in a month, but it produced no immediate result. Mnuchin described the meeting as “constructive” and “a candid discussion on trade issues”, but offered no further detail.

The PBOC said in a statement that the two finance officials “exchanged views on global economic and financial situation, G20 issues, as well as topics of mutual interest”.

The Buenos Aires G20 summit in December 2018 marked the start of a five-month trade truce between the United States and China to allow for negotiations to end their intensifying trade war. But those talks hit an impasse last month, prompting both sides to impose higher tariffs on each other’s goods as the conflict nears its first anniversary.

The widening fallout from the U.S.-China trade war has tested the resolve of the group to show a united front as investors worry if policymakers can avert a global recession.

The bickering over trade language has dashed hopes of Japan, which chairs this year’s G20 meetings, to keep trade issues low on the various agendas at the finance leaders’ meeting.

Mnuchin said that U.S. President Donald Trump and Chinese President Xi Jinping would meet at a June 28-29 G20 summit in Osaka, but the meeting has not been confirmed by China.

The planned meeting was said by Mnuchin to have parallels with the two presidents’ Buenos Aires meeting on Dec. 1, when Trump was poised to increase tariffs on $200 billion of Chinese goods.

Trump took that step in May and will be ready to impose similar 25% tariffs on a remaining $300 billion list of Chinese goods around the time of the Osaka summit.

At the Buenos Aires meeting, the G20 leaders described international trade and investment as “important engines of growth, productivity, innovation, job creation and development. We recognize the contribution that the multilateral trading system has made to that end,” their communique said.

The leaders in that communique called for reform of World Trade Organization rules that they said were falling short of objectives and pledged to review progress at the Japan summit.