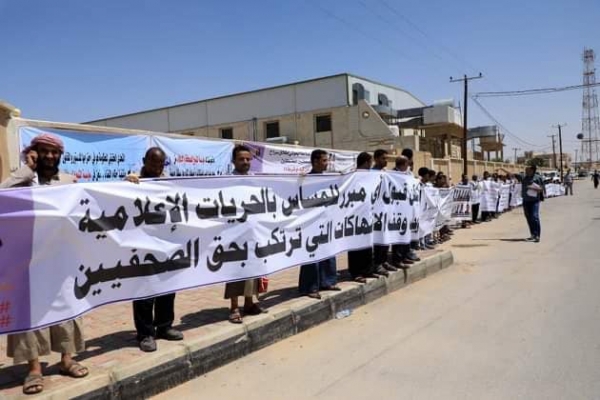 Yemeni journalists on Sunday called the international community and UN to pressure all warring parties into releasing 24 of their colleagues detained in different jails of a country suffering 4-year conflict between the Saudi-backed official government and the Iranian-backed Houthis.

At a protest staged on the Yemeni Press Day by the Yemeni Reporter National Organization and other media groups in the government-held central governorate of Marib, journalists strongly condemned all violations against reporters and the Houthi "persistent war against journalism and freedom of expression, and abduction of reporters, writers and activists."

Those who commit crimes and violations against journalists should be brought to justice, said protesters, rejecting the "politicization of the abducted reporters' human issue."

The International Journalist Protection Committee has repeatedly accused all warring parties in Yemen of committing wide violations against reporters and human rights and imposing restrictions against critics across the country.

Sunday protest called for immediate release of 24 journalists and for international pressure on Houthis to free abductees, including 10 reporters detained by the group for 4 years now.

Protesters also urged the Yemeni government and Saudi-led coalition to take actions to free to free the journalist Mohamed Quid al-Moqree, who has been jailed by al-Qaeda since 2015, to boost media and expression freedoms, and stop irresponsible practices faced by reporters and media outlets in areas under government control.

They called the government to pay journalists working for its official corporations.

On 16 May, the International journalist union threatened to hold the Yemeni government accountable for the unpaid salaries of journalists and for their resultant deteriorated conditions.

Some 1,000 journalists working for public corporations and living in Houthi-held areas suffer humanitarian and livelihood crisis threatening their own and their families' lives, the union said.