Houthis: Bodies in Aden gave us coordinates of al-Jala`a camp 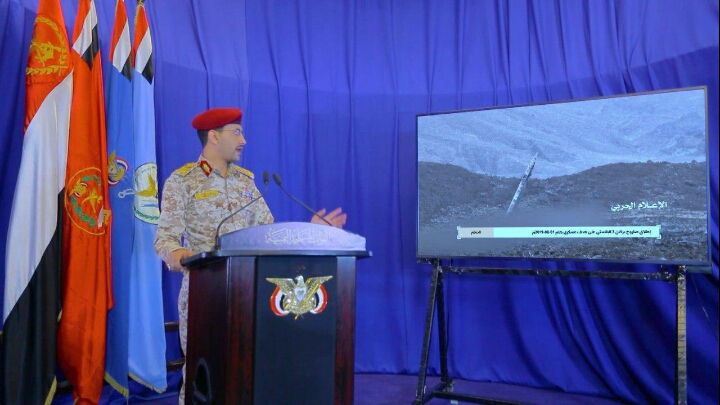 The Houthi group (Ansar Allah) in Yemen revealed on Friday that they manufactured thethird generation of ballistic missile system, "Burkan", which entered the battlefield in front of Yemeni forces backed by the Saudi-led  Arab coalition in a move to warn of further escalation of the conflict in the country for the fifth year.

The Houthi military spokesman for the, Brigadier Yahya Saree at confirms in a press conference on  Friday in the capital Sanaa, that his group's missile force had successfully carried out two operations on Thursday.

He explained that the operation was first joint operation carried out by the air force and the missile force targeted a camp for what he called "mercenaries" in the southern province of Aden, led to the death and wounding dozens of "mercenaries, including leaders," adding that the second is the launch of a long-range ballistic missile on a military target east of Saudi Arabia, coincided with the Aden operation.

Saree pointed out that the attack on a camp in Aden comes "within the strategy of pre-emptive strikes aimed at thwarting the plans of the coalition of aggression in the military escalation on various fronts."

The military spokesman of the Houthis said that the successful operation came after careful intelligence monitoring and cooperation from bodies in Aden, the interim capital of the internationally recognized legitimate government of Yemen, praising "the efforts of all the collaborators who put Yemen's interests above any other interest,".

At least 50 people were killed and dozens wounded in two attacks targeting a military parade and a police station in Aden province on Thursday morning.

The Houthi group (Ansar Allah) claimed on Thursday responsibility for the attack on the military parade of the Arab Coalition Forces to support the legitimacy in Yemen and the internationally recognized "legitimate" government forces at the Al-Jala`a camp in the Directorate of Buraiqa, west of Aden governorate, in which 37 soldiers were killed, including the commander of the 1st BrigadeBrigadier General Muneer al-Yafe`i, (called Abu al-Yamamah," according to a statement from the Ministry of Interior in the government of "legitimacy".

The attack came minutes after the attack killed and wounded 13 soldiers in a car bomb attack targeting a police headquarters in the Directorate of Sheikh Osman in Aden.

The Organization of the Islamic State  ISIS  claimed on Friday responsibility for this attack.

The military spokesman for the forces of the Houthis, Brig. Yahya Sari said at a press conference on Friday, that the missile force of his group succeeded in the second operation, which coincided with the Aden operation, the launch of a long-range ballistic missile on a military target in al-Dammam area of eastern Saudi Arabia.

He pointed that the new rocket is a type of "Burkan 3", which is the third generation of the "Burkan" ballistic long-range system.

The missile capable of hitting targets along the geographical width of the countries of "aggression", in reference to the main countries participating in the Arab Coalition to support legitimacy in Yemen.

He said  (Burkan-3) missile made in Yemen and equipped with advanced technology. It has undergone successful trials and technical developments to bypass enemy interceptor systems

It is considered one of the most important weapons of strategic deterrence.

Saree did not immediately disclose the type of missile used to target forces loyal to the coalition in Aden on Thursday, saying only that "will be announced during the coming period."

Al-Dammam is the capital of the Eastern Province of Saudi Arabia and is characterized as a commercial and residential center and includes administrative bodies of the region and government departments.

The Yemen`s  internationally recognized government and the Arab Coalition accuse Iran of supporting the Houthis by smuggling weapons and ballistic missiles to them, which they constantly target Saudi territory, a charge Tehran and the group deny.

The military spokesman  of Houthis Brigadier General Yahya Saree said on Friday that "60 dorne attacks was carried out over the past three, at the rate of two operations every 72 hours. The most prominent of these operations were targeted the headquarters and bases of the enemy, including 16 operations on Abha airport, 14 operations at Jizan airport, 11 operations on Najran airport and 9 operations on Khamis Mushait base."

He added: "The operations of the Air Force during the month of July amounted to 23 operations, including 18 operations drone attacks with Qasif 2K, targeting Saudi airports and military bases and achieved its targets."

Recently, the Houthis group has intensified continuous attacks by drones, ballistic missiles on Saudi and Yemeni forces and vital Saudi targets, most notably airports in Saudi cities near Yemen.

Houthi forces said mid-May they had a target bank of 300 vital and military targets in Saudi Arabia and the United Arab Emirates.