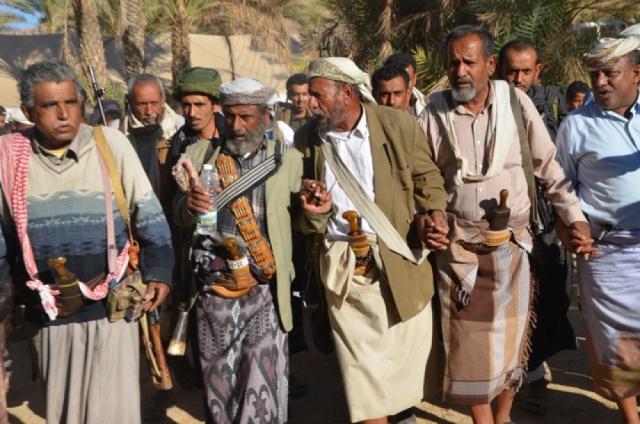 Tribes in the district of Yafa'a in Lahj province on Saturday condemned forced deportations of Yemeni northerners from the southern port city of Aden, rejecting racist acts attributed to them.

After a meeting of their elders, the tribes called their people for more cohesion and putting the national interest above anything else, and not to give enemies a chance to take advantage of the Thursday's attacks in Aden and target northern workers, simple people, IDPs and their families.

They said in a statement: "The sons of Yafa'a were saddened by the loss of a group of their heroes in a cowardly and treacherous operation on a military parade at the Al-Jalaa military camp on August 1st".

"The battle is not with unarmed simple people, but with the coup forces and regional powers backing them. It is a battle of the Arab destiny, not a battle against vendors, IDPs and weak people. Any groups commit any inhumane acts, they only represent themselves," the statement said, calling on the concerned authorities to hold those responsible to account.

The tribes called on the legitimate government, the leadership of the southern transitional council and leaders of the peaceful southern movement to condemn such inhumane acts and cooperate to end them before they escalate and threaten the interest of the whole country.

On Thursday, at least 50 military and police officers and soldiers loyal to the UAE-backed southern transitional council were killed in two attacks on a military parade at the Al-Jalaa military camp and Al-Sheikh Othman police station.

The Houthi Group, Ansar Allah, claimed responsibility for the attack on the military parade, which it said was carried out with a medium-range ballistic missile. 37 military officers and soldiers were killed in the attack, including Brigadier General Moneer Al-Yafai, known as Abu Al-Yamamah, who was the commander of the first support brigade.

The attack came shortly after an ISIS-claimed car bomb attack on the Al-Sheikh Othman police station, which killed 13 policemen, according to the interior ministry within the international recognised government.

Many northern people have fled to southern regions, which were retaken from the Houthis in mid-2015, for work and refuge. After the Thursday's attacks, UAE-backed security belt forces started to arrest and deport northerners in a campaign described by observers as racist.

An eyewitness told Debriefer about two deportation processes in which the security belt forces arrested northerners of simple professions.

And despite orders by President Abdrabbu Mansur Hadi to the security authorities in the southern regions to take action and stop deportations and other illegal acts targeting northerners, the deportations have continued.