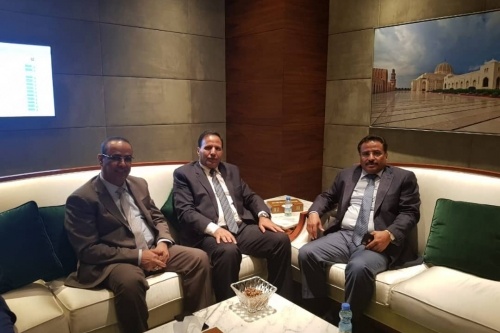 Three senior officials of the Yemen's internationally recognized government arrived on Saturday evening to the Omani capital Muscat to hold talks with officials there on the latest developments in Yemen.

In the website of the Ministry of Interior of the "legitimate" government of Yemen reported on Sunday that Deputy Prime Minister and Minister of Interior Ahmed al-Maisari arrived in Muscat on Saturday evening at the head of a high-level delegation on an official working visit that lasts several days.

The delegation includes, in addition to al-Maisari, Abdulaziz Jabari, deputy speaker of the House of Representatives (Parliament), adviser to the Yemeni President and Minister of Transport Saleh al-Jabwani.

The Yemeni Interior Ministry said that the visit came at the invitation of the Omani leadershi in order to discuss the situation and possible ways to achieve peace in Yemen in addition to discussing the strengthening of bilateral relations between the two countries and ways to develop them.

Last Sunday, the three officials demanded in a joint statement that the UAE be expelled from the Arab coalition to support legitimacy in Yemen and to be tried internationally for crimes committed against Yemenis as it deviated from the objectives for which the coalition was called to overthrow the Houthi coup and restore state institutions, under the leadership of President Abdrabbu Mansour Hadi.

The three officials considered in their statement that the UAE "adopted and supported a similar coup against legitimacy in Aden and has adopted, supported and continues to support projects to tear Yemen and its national and community fabric through the establishment and arming of militias affiliated to it outside the framework of the Yemeni state institutions and administrations.

The statement called all national forces and personalities inside and outside Yemen "To form a broad national front to defend the Republic of Yemen, which today is at risk of disintegration and fragmentation as a result of the illegitimate ambitions of some regional powers and their agents at home.

The UAE warplanes launched on August 29th airstrikes on the Yemeni government forces in the outskirts of Aden and neighboring Abyan province to stop their advance accelerated courier to regain control of the interim capital Aden.

And so after UAE-backed Southern Transitional Council (STC) forces took control of the city on 10 October after four days of violence clashes with government forces that killed scores of peopl.

The UAE has admited the targeting Yemeni government forces, justifying this by targeting "terrorist militias in defense of coalition forces."

On the same day the Yemeni President Abdrabbo Mansour Hadi called on Saudi Arabia to intervene to stop "blatant UAE intervention", which supports the forces of the armed separatist Southern Transitional Council, including by aerial bombardment against the Yemeni armed forces.

"We will not be intimidated by the planes of the targeted terrorists of our land and we will regain Aden and extend the influence of the state," he said.