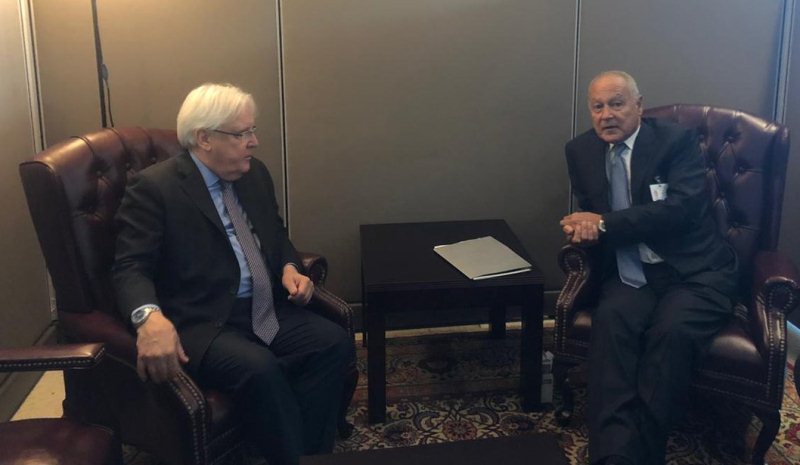 Arab League Secretary General Ahmed Aboul Gheit accused on Thursday Iran of using the Houthi Group (Ansar Allah) as a card to manage its conflict with the United States, saying that Iran's interventions made the conflict in Yemen insurmountable.

Aboul Gheit, during his meeting in New York with UN Secretary General's Special Envoy for Yemen Martin Griffiths, reiterated the Arab League's position that supports Yemen's territorial integrity and regional integration, and the importance of restoring the country's legitimate institutions and preventing Yemen from becoming a threatening platform for its neighbors.

According to an official source at the General Secretariat of the Arab League Aboul Gheit pointed to "the seriousness of what Iran is doing of using Houthi militias as a card to manage its conflict with the United States."

He added that Iranian interventions in Yemen prolonged the conflict and made it more intractable and held Iran and the Houthis the primary responsibility for exacerbating the suffering of the Yemeni people and deepening the humanitarian crisis there.

According to the source the meeting discussed the Yemeni crisis and efforts to revive the political process, especially the unilateral initiative launched by the Houthis to stop attacks against Saudi Arabia and this may entail opportunities for peace in Yemen.

The source cited the Secretary-General of the Arab League as saying it is necessary to test every opportunity for peace, and what matters in this regard is the actions of the Houthis, not their words.

The Houthi group had last Friday announced that they would stop launching attacks on Saudi Arabia, and demanded Riyadh make a similar announcement.

Saudi Arabia's Minister of State for Foreign Affairs Adel al-Jubeir said on Saturday that Riyadh would monitor the seriousness of implementing the initiative on the ground.This was the first Saudi reactio.

For his part, Griffiths said in a tweet published by his office on Twitter that it was a pleasure to meet with Ahmed Aboul Gheit, in New York and brief him on the ongoing efforts to reduce violence, revive the political process and support opportunities for peace in Yemen.