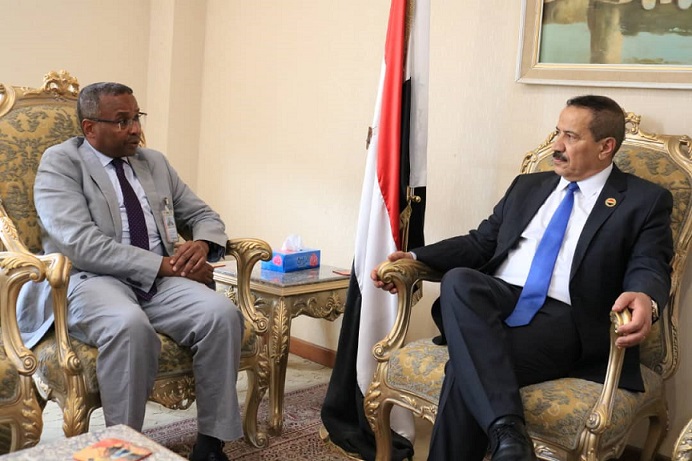 The Yemeni internationally-recognized government has condemned Houthis' denying a UN official entry to the rebel-held capital of Sana'a.

Their actions towards the UN official prove Houthis persistent defiance to the international community and crimes against civilians inside and outside areas under their control, Moammar al-Eryani added.

Houthi actions were spurred by a UN report shedding light on violations committed by the group, including sexual valance against women at their detention centers, the minister said.

On Monday, Houthis forced the UN official's plane to return to Amman just after his arrival at Sana'a airport, took his travel permission and prevented him from leaving the plane, informed sources said Tuesday.

The sources attributed the Houthi denial to their earlier statement that the UN official was "unwelcome person, following the UN experts' report condemning the rebels for human rights violations."

Minister Eryani called on the UN and OHCHR to expose facts to the world on the Houthi "rude behavior" and "crimes and to not yield to their repressive practices from which even UN officials have not been safe."

No immediate comment has been issued by the rebels or the OHCHR on the event.

Yemen has been racked by a 4.5-year bloody conflict between the official government's forces, backed by a Saudi-led coalition, and the Iranian-backed Houthi rebels who ousted the government in 2014.

The unofficial authorities dubbed the UN report as biased, for it "serves the aggression states and hasn't given the truth."

The expert "panel was not able to visit Yemen this year following the [coalition] aggression states' refusal," Houthi deputy FM Ali Taiseer added in a release.

On September 3, the UN exports' report said the Saudi-led "may have used starvation as a method of warfare, acts that may amount to war crimes. The very survival of the 24 million people in need should be the first priority."

Yemeni, Emirati and Saudi governments and Houthis along with their popular committees have made use of a pervasive lack of accountability for violations against the international humanitarian and HR laws, the report added.