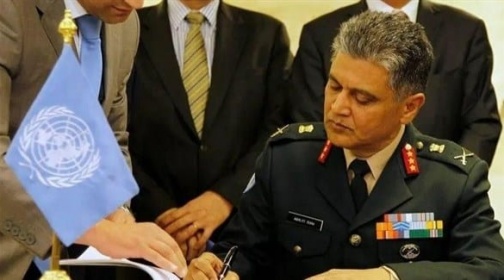 The newly-appointed Indian General Abhijit Guha will later set the date for his RCC first meeting, the Saudi Asharq Al-awsat paper quoted a source at the Yemeni government as saying.

At the meeting, government negotiators complained about Houthi obduracy, obstruction of deal application and breaches of truce, calling for pressure on the rebels to implement the Stockholm Agreement and to leave Hodeida city and ports.

Deployment of ceasefire monitoring teams need to be started in cooperation with the UN relevant team, they added.

On Saturday, the UN envoy to Yemen said the Indian retired Lieutenant General Abhijit Guha had assumed his task to lead the RCC in Hodeida.

Glad to welcome the General Guha as the new head of the UN Yemeni Observation Mission (UNYOM), Martin Griffiths tweeted, after the Danish General Michael Lollesgaard left the post on July 24.

The UN envoy wished success for his fellow, looking forward to working "with him for the pact application."

On 12 September, the UN Secretary-General Antonio Guterres appointed Guha to lead the RCC and UNYOM in the Yemeni western port city.

Guha is the third general appointed as chairman of the UN mission, after the Dutch General Patrick Cammaert (who resigned last January) and the Danish General Lollesgaard (who took the post for six months).

The RCC includes six servicemen from each of warring parties (the Yemeni official government and Houthi group) as members in a mission tasked with monitoring rivals' compliance with Stockholm Agreement on Hodeida ceasefire and redeployment.

On 9 September, the RCC said a joint operation (JO) center had been established and operated, with liaison and coordination officers from both warring parties and from the UN included in the new center.

The JO center will work – from the UN mission office – on monitoring the Hodeida ceasefire, the RCC added.

At a meeting chaired by acting chairman Hani Nakhla, the RCC members decided to deploy monitoring teams in four posts at Hodeida frontlines, as a first step to stabilize ceasefire and end suffering and casualties among civilians, according to the RCC.

But those teams have yet to commence their duties.

Local authority, security forces and revenues of Hodeida ports are the main points stalling any progress towards the pact application.