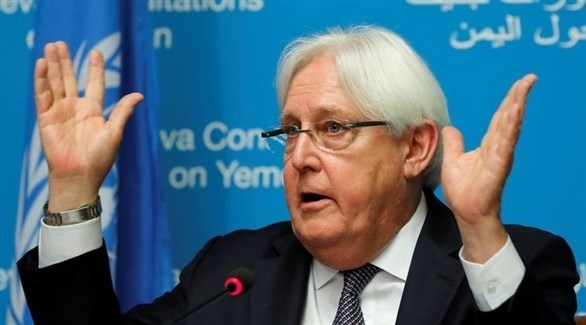 Riyadh (Debriefer) - The UN special envoy for Yemen has made no tangible amendments to the draft joint declaration on the comprehensive solution for Yemen's crisis, a government official said Tuesday, after government rejection to the first version introduced by Martin Griffiths last July.
The UN new draft includes the refused points giving the Houthi group a "full authority over Sana'a international airport and direct flights," the official added anonymously.
This "fully invalidates the Yemeni State's legitimacy, and legitimizes the coup," according to the al-Araby al-Jadeed.
Brought by Griffiths during his visit to Riyadh, the draft deals with the government as a "party to the conflict. This is in contrast with all peace terms of references stating that there is a legitimate government and a coup led by Houthis," he argued.
On Monday, Griffiths arrived in the Saudi capital to exert more pressures on the UN-recognized government to accept the joint declaration.
The UN envoy's 4-day trip aims at mediating between parties to reach a wording mutually approved by Yemen's government and Houthis on a nationwide ceasefire and a set of humanitarian and economic measures, and to resume the political process, a UN source said.
However, says the Yemeni official, the "UN slackness and failure to put core amendments in the joint declaration wording make the visit doomed to fail, as the draft meets only the Houthi demands."