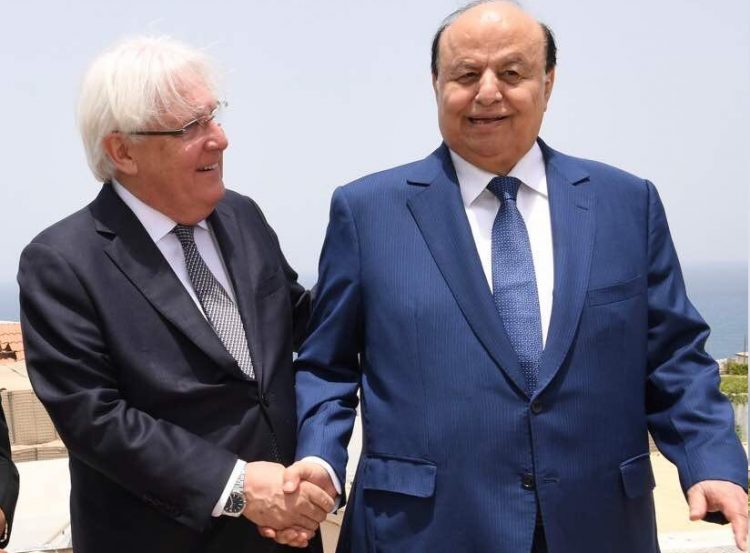 Riyadh (Debriefer) - The UN special envoy, Martin Griffiths is expected on Wednesday to meet and discuss with Yemen's President Abd Rabbu Mansour Hadi and Prime Minister Maeen Abdulmalek a draft joint declaration on comprehensive solution for the war-torn country.
On Tuesday, two firsthand sources told Reuters that Hadi would leave Saudi Arabia on Wednesday for medical treatment in the United States.
Earlier on Tuesday, Griffiths discussed in Riyadh with GCC secretary-general, Nife al-Hajraf, and Saudi envoy for Yemen efforts to end the Yemeni crisis.
The UN envoy will leave Riyadh on Thursday to Muscat where he will meet with Houthi negotiators, diplomatic sources said.
The UN envoy has made no tangible amendments to the draft joint declaration, a government official said Tuesday, after the government had rejected the first version introduced by Griffiths last July.
The UN new draft includes the refused points giving the Houthi group a "full authority over Sana'a international airport and direct flights," the official added anonymously.
This "fully invalidates the Yemeni State's legitimacy, and legitimizes the coup," according to the al-Araby al-Jadeed.
Brought by Griffiths during his visit to Riyadh, the draft deals with the government as a "party to the conflict. This is in contrast with all peace terms of references stating that there is a legitimate government and a coup led by Houthis," he argued.