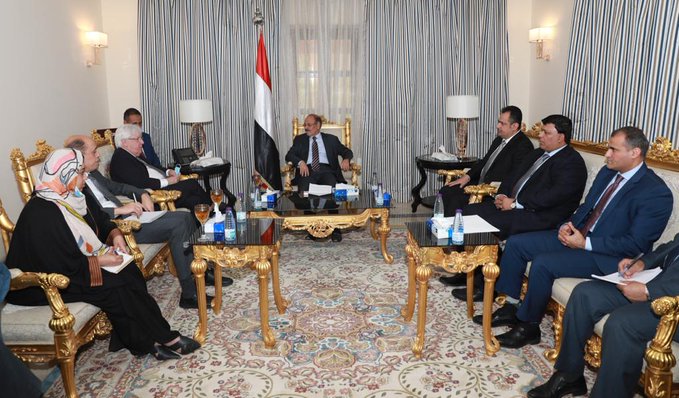 Riyadh (Debriefer) - The Houthi persistent stalling of repairs to the floating storage and offloading (FSO) facility Safer poses disastrous risk to the region and world, the Yemeni vice-president said Wednesday.
By denying the UN team access to assess Safer, the Houthi group belittles all the international efforts, Ali Muhsin al-Ahmar added at meeting with the UN envoy for Yemen, Martin Griffiths, in Riyadh, according to Saba.
The UN envoy valued the government positive reaction to the FSO issue and keenness to solve the facility's problem.
Griffiths reiterated his efforts to bring about a comprehensive solution for the Yemeni crisis.
The UN envoy is holding talks in Riyadh on the FSO with Yemeni government senior officials and others directly connected to Yemen's crisis.
On Tuesday, the Saudi ambassador to Yemen, Mohamed Al Jaber, said he discussed with Griffiths the need for urgent check of the supertanker.
Beirut explosion last week raised Yemeni, regional and global fears about risks of an oil leak from Safer and resultant catastrophic impacts.
The Houthi Supreme Political Council and government have made contacts with Sweden and Germany on sending technical teams in order to assess and repair the giant reservoir, the Houthi-run al-Masyra paper said Tuesday.
On Monday, Arab League Secretary-General, Ahmed Abual Gheit, called on the UN Security Council to intervene and enable the UN team to repair the FSO facility off the Yemeni western seaport of Ras Isa.
On Sunday, the US accused the Houthis again of thwarting a deal to assess and repair Safer.
The Houthis have failed to reach a pact allowing the UN team access to Safer, the White House tweeted.
The Houthis' persistently obstructing and delaying the UN team portend an environmental, humanitarian catastrophe risking Yemen and the region, it added, underlining the need for necessary repairs be made without delay.