A Royal Air Maroc plane collides with a Turkish airline's one 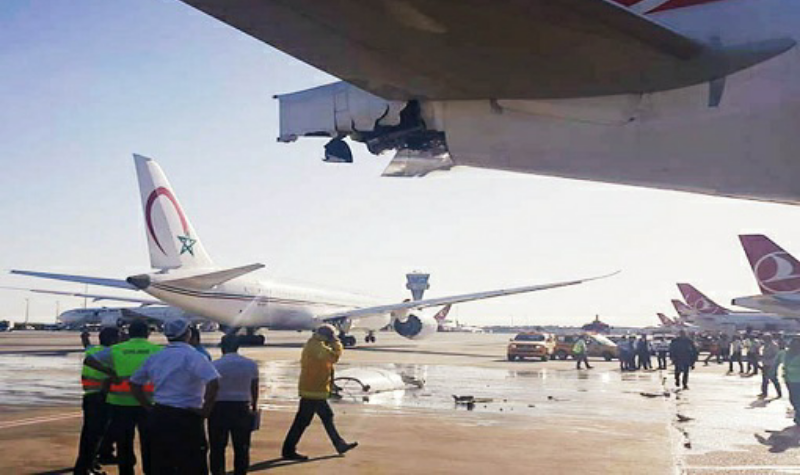 Royal Air Maroc’s difficulties are never ending. This time, the wing of the company’s plane hit a Turkish Airlines plane’s tail, minutes before the take-off, in Istanbul at the Atatürk International Airport, says the TV channel Russia Today on Friday.

The incident occurred in the early hours of Thursday, August 9th, in the parking area near the international terminal. While taxiing, the right wing of the RAM aircraft struck the APU (the auxiliary power unit turns an electric generator that powers the electrical system on the aircraft when the main engines are off.

Earlier today in Istanbul, a Royal Air Maroc 787 (CN-RGT) taxiing for departure collided with a Turkish Airlines 777 (TC-JJZ) parked at the gate. The 787’s right wingtip struck the 777’s APU.

«The B-787 aircraft, was carrying out, Thursday, August 09th the AT 911 flight connecting Istanbul to Casablanca with 269 passengers on board. While taxiing the aircraft to the take-off runway of Atatürk airport at 14:45 GMT, a slight collision occurred between the right wing of the aircraft and the tail of a Turkish Airlines aircraft», says the Moroccan airline company in a statement.

«Passengers have been disembarked. The company provided them with catering, ground transportation and accommodations. Another plane has also been assigned to transport passengers to Casablanca».

An investigation was opened to clarify the circumstances of the incident and to determine the responsibilities, concludes the airline.