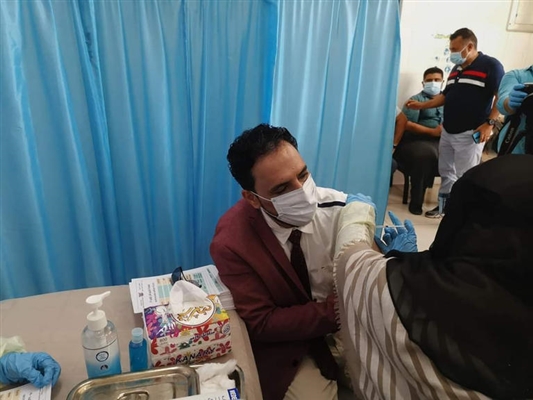 Aden (Debriefer) - More than 10,000 Yemenis have received the first dose of AstraZeneca anti-Covid-19 vaccine, according to official statistics by the Aden-based health ministry.
Since the vaccination campaign started in 45 districts, 10,482 people were given the first shot, including 1,187 with chronic diseases, 3,576 aged people and 5,037 health workers, said deputy minister for health.
No side effects occurred on those who received the vaccine, Dr. Ali al-Walidi added, noting that the campaign would continue until 5 May, and would resume after Eid al-Fatar holyday.
The Yemeni official called on all the citizens to take the lead in receiving the vaccine, and to observe the protective protocols.
The Yemeni government-held areas recorded 4,135 infections and 567 deaths of the pandemic since the beginning of January 2021, the health ministry said in a previous statement.
Last week, the World Health Organization said the Houthi group rejected its plan to carry out a joint vaccination campaign against coronavirus in Yemeni northern areas held by the group.
The Sana'a-based health ministry initially ignored WHO's call for giving the vaccine to health staff, and then asked for 1,000 shots assigned for 500 doctors, who should be immunized by the ministry itself and in its HQs, WHO representative in Yemen said.