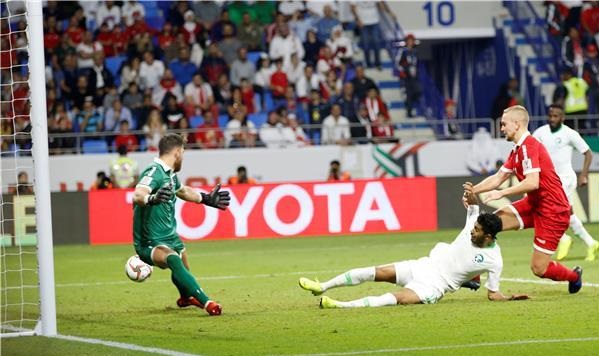 Saudi Arabia scored on either side of half-time to become the sixth team to book their spot in the next round with a well-deserved 2-0 win over Lebanon in their penultimate Group E match of the 2019 AFC Asian Cup late on Saturday.

The Green Falcons, who had opened with a 4-0 rout of DPR Korea last Tuesday, ensured their spot in the Round of 16 with Fahad Al Muwallad opening on the 12th minute before Hussain Al Moqahwi got the second in the 67th to ensure full points.

The win saw Saudi Arabia with a maximum of six points after two games to send them through to the Round of 16 with their mouth-watering encounter against Qatar still to come next Thursday.

Traditional rivals Qatar – who had opened with a 2-0 win over Lebanon last Wednesday - are also in the running for a second spot from the group provided they can better DPR Korea in Sunday’s match in Al Ain. Qatar and Saudi Arabia are then scheduled to play each other in their final group match at the Zayed Sports City Stadium next Thursday.

Saudi Arabia now join the list of six qualifiers so far that includes Jordan (Group B), South Korea and China (Group C) and Iran and Iraq (Group D) into the Round of this 24-team competition.

With a near capacity Al Maktoum Stadium cheering on both sides, it was Saudi Arabia who dominated and kept things under close control, barring the occasional counters from the Cedars, just like they did in their 4-0 rout of DPR Korea last week.

Juan Antonio Pizzi’s boys played the waiting game to perfection once again as the Lebanon defence managed to soak in everything that was thrown at them. After two close calls on goal, the former three-time champions got the breakthrough when Al Muwallad pounced on a mistimed clearance from ex-Shabab Al Ahli Dubai defender Joan Oumari and found the roof of the Lebanese net with a stinging volley.

Saudi Arabia continued pressing for a second and, in fact, did come close to scoring on a couple of occasions, but for a strong Lebanese defence. First it was Hatan Bahbri’s feeble attempt in the 19th minute going straight to Mehdi Khalil on the Lebanon goal, and then it was Abdul Aziz Al Bishi mistiming his header off a Bahbri cross.

The second half was an exact opposite as Lebanon showed a better urgency while getting a better look at the exchanges. But it was Saudi Arabia who ensured full points through a second goal in the 67th when Al Moqahwi managed to evade his marker Robert Alexander Melki and toed into the net past Kahlil.

Lebanon did come up with some intense pressure upfront towards the end, but the Saudi defence did well to clamp down and deny the Lebanese a clear look at their goal.

Opening out with back to back titles in 1984 and 1988, the former three-time champions Saudi Arabia last won when the competition was hosted by the UAE in 1996. However, they are yet to be crowned continental champions during the new millennium.