Athletes in Yemen .. between devastating war and extremism ideologies 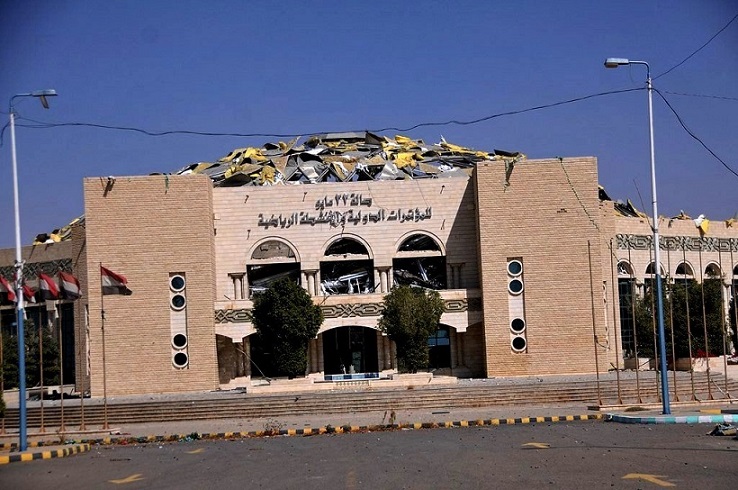 Sports in Yemen is living a state of 'clinical death' because of the events experienced by the country over four years following the Houthi takeover of the capital Sana'a and most Yemeni cities and of the power by force, leading to military intervention by a Saudi-led coalition at request of President Abd Rabbu Mansour Hadi.

The devastating war has excluded neither sports infrastructure in most of the country's provinces nor sportspersons, with some killed and others injured in direct fighting alongside one of the warring parties or in airstrikes.

In fact, Yemeni sports has not experienced throughout its history such destruction and decline in activities as that caused by the conflict, which has rendered facilities into ruins.

Most of the sports facilities and stadiums have been damaged in airstrikes by coalition that has blamed Houthis for piling weapons in those areas and turning them into depots, barracks and prisons, according to pictures carried by some websites and social media for military machinery inside these facilities. Houthis have strongly denied these claims.

The left signs of Yemeni sports, which survived strikes, have been fully looted by armed groups. At top of those facilities are the Sana'a-based 22 May Sports Hall and Ali Muhsin al-Muraisi Stadium (the country's largest facilities), in addition to other establishments in Aden, Ibb, Dhamar, Taiz, Lahj, Abyan, Dhalea, Hajjah, Hodeida, Sa'ada, Mehweet and Amran governorates. 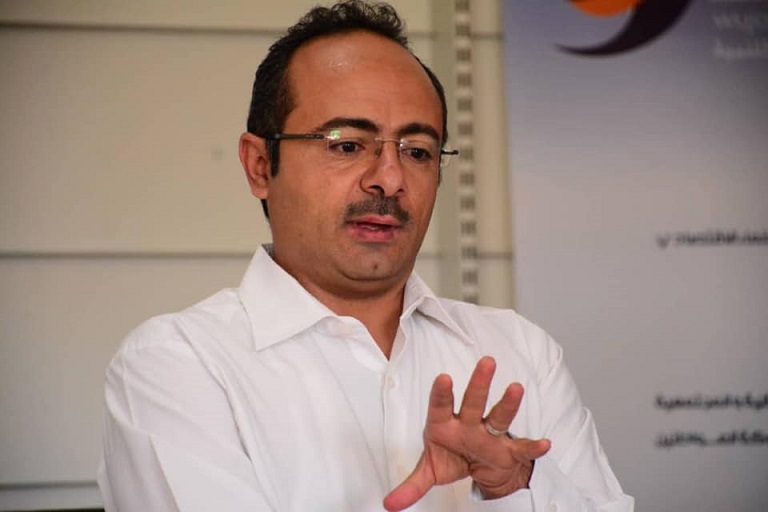 The Gravest Losses in the 21st Century

"Sportspersons in this impoverished country have waited for long decades to see their sought sports facilities a reality where they could exercise games," Amri told Debriefer. "But they have been frustrated by seeing their facilities destroyed in minuets by war." 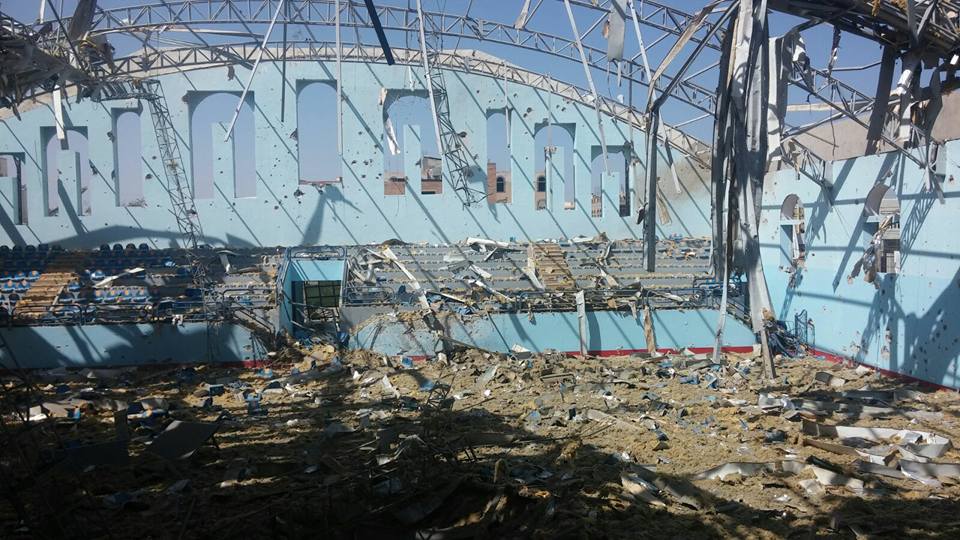 Initial Loss of US$ One Billion

The total loss caused by coalition strikes on sports establishments has amounted to some US$ one billion (650-million-worth initially estimated damages and other 350 million as indirect losses), according to statistics issued in May 2019 by the Houthi-run ministry of sports.

"107 sports facilities have been totally or partially damaged," said the statistics carried by the Sana'a-based Saba. "Sana'a has come first with 32 damaged establishments costing $ 210.4 million." 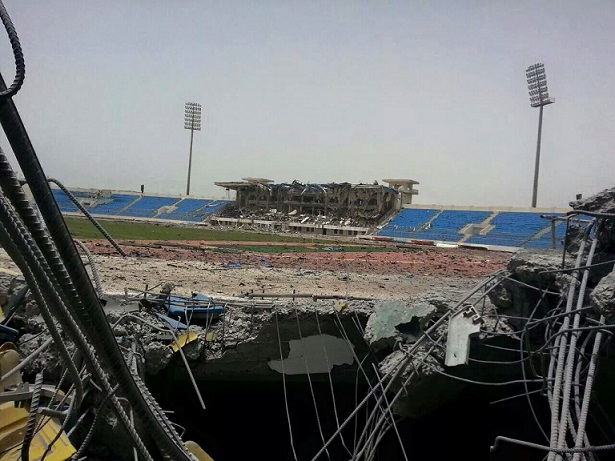 The wider fighting area the more likely the figure is apt to increase, particularly in Hodeida where some of the sports facilities have been already under attacks and others are feared to face the same fate.

While no official statistics have been issued by the internationally recognized government, its sports minister Nief al-Bakri has blamed Houthis for 70 percent of total damages suffered by sports facilities, according to the Emirati al-Bayan paper. 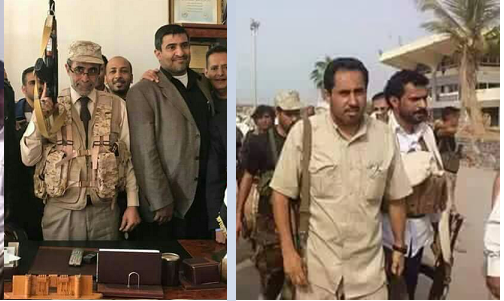 The war has brought about a new reality on the ground, with sports activities being directed by two rivals, leaving Yemeni sports in a state of clinical death, both in liberated and Houthi-held areas.

In Sana'a, Houthis have appointed the political leader of Haq Party, Hassan Zaid, as sports minister, while the Aden-based government of Hadi nominated the former leader in the so-called southern resistance and Islah Party (Muslim Brethren offshoot in Yemen), Nief al-Bakri, to lead a rival ministry. 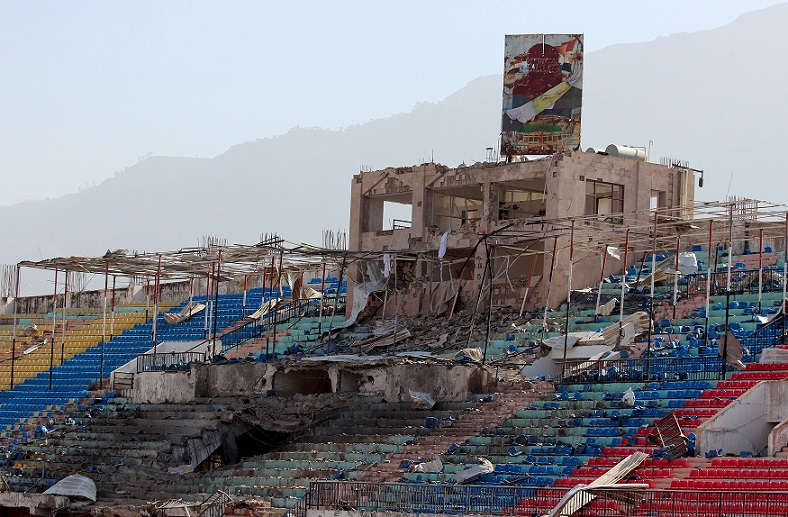 Most of the Houthi-controlled youth provisions are channeled into battles, the rest is used to hold simple sporadic sports activities. Still, the ministry of finance decided late in 2018 to freeze the youth fund account, leading to total stop in official sports activities in north Yemen.

In the government-held areas, fiscal provisions are stemmed from the Aden-based youth fund, but activity is almost absent too. While Aden sees some popular contests between teams and clubs, sports activity is absent in other provinces. The largest portion of the youth fund provisions is allocated for travel allowances and bonuses for fake participations dominated by persons closely linked to Bakri, according to Debriefer private sources. 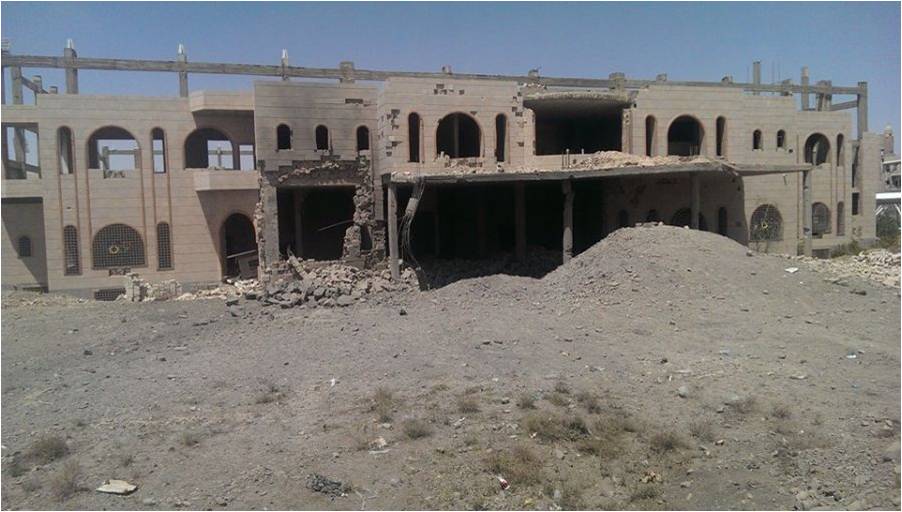 War impacts have not been limited to damaged infrastructure, but have also affected the athletes themselves and halted activity at home and abroad.

The main tournament in the country, football, has completely stopped in all Yemeni provinces; no general competition or related activity, except for some amicable matches occasionally organized by clubs. Recently, the Yemeni football federation has announced the resumption of second-grade contest in the form of club-groupings in some provinces, amid fears among clubs' leaderships of repeated failure.

Air blockade imposed by coalition has also caused Yemeni teams to be absent from abroad participations, except for the football teams that have been present in all FIFA contests, with the Yemen-Saudi Wadiea and Yemen-Oman Shahin land ports serving as the only two outlets for sports teams. 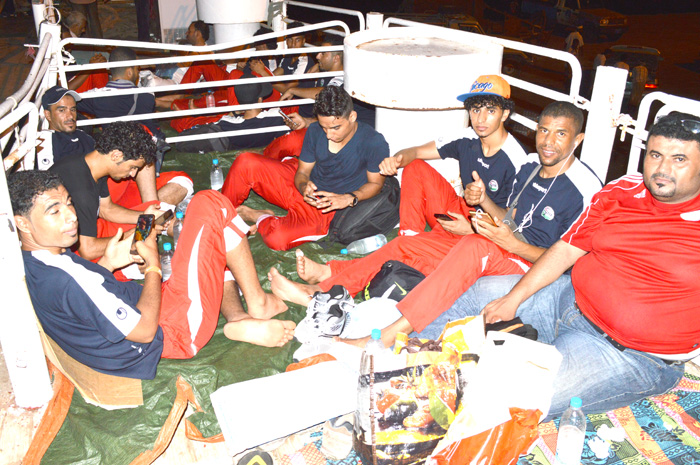 Among other repeated sufferings caused by war for athletes over two years, was the painful trip paid by the Yemeni football team who had to cross the Red Sea for 18 hours on livestock ship to an African country, before heading for Qatar, to take part in Russia 2018 World Cub eliminations.

Despite the grave sufferings, Yemeni teams have achieved considerable gains in qualifications at Asia level, with some teams reaching the finals for the first time.

FIFA strict rules have helped Yemeni football federation get out of fighting sphere, as the warring parties have allowed for participation in different continental tournaments, while activities of other federations have stayed stalled, partially or totally, following the war.

Some Yemeni athletes have been stuck abroad, forced to stay in other countries to represent Yemen there. For example, the judo competitor Ali Khosruf who has said he had to stay outside the country in order to keep participating in behalf of Yemen. 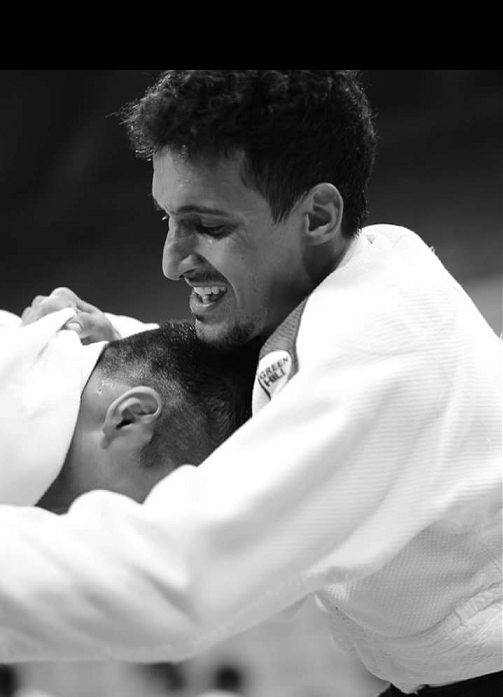 "Many issues have prevented me from returning home," Khosruf told Debriefer. Among these causes are "lack of regular flights, very-high priced tickets of the only 'Yemeni' airlines, and security concerns in terms of land journeys from Sana'a to Aden or Seyoun."

However, the Yemeni judo athlete spends large sums to stay in Egypt or Jordan for long periods awaiting for contests, not to mention the lack of environment suitable for preparatory competition, as that in Japan, Russia or Korea.

Partially halted sports activity in Yemen has raised many fears, particularly potential involvement of youth in other religious extremism-associated activities, under variable slogans, in battle fields. 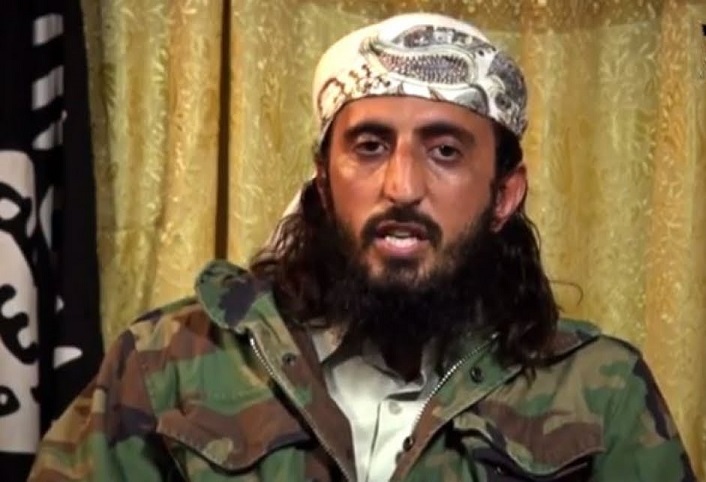 Such fears have been enhanced by the fact that Jalal Baleid (or Abu Hamza al-Zenjubari) turned from former goalkeeper of Hassan Club – one of the most prominent clubs in south Yemen – into a leader of ISIS branch in Yemen, after he had defected from al-Qaeda. He later was killed in airstrike by a US drone in February 2016.

Other sportsmen have joined either the warring parties to fight under jihad cause systematically organized by religious groups that have resulted from this war and the total absence of a state on the ground.

In the south, players, who had previously represented Yemen in different occasions, joined armed religious groups to repel Houthis out of Aden during March to July 2015. 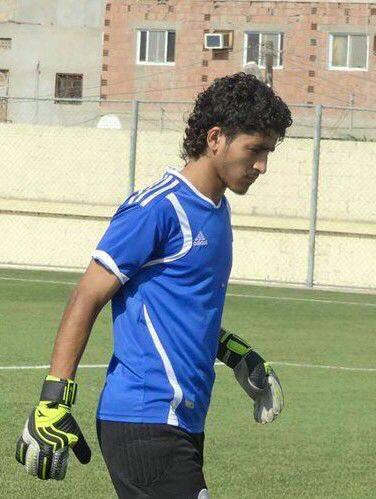 Abdullah Aref Abd Rabbu, goalkeeper of the Yemeni youth team and Aden-based Shoala Club, was killed in 2015 while fighting alongside Hadi forces. Two footballers of the Sana'a-based Sha'ab Club, Ali al-Saudi and Mohamed al-Dailami, were killed in battles in 2015 near Lahj and 2016 in Marib, respectively.

In the opposite Houthi side, the Yemeni wrestler Ibrahim al-Radami was killed in Nihm front, at Sana'a fringes, and his fellow the footballer Abdul Jabar al-Edrisi was killed later in the same year in Hodeida front. 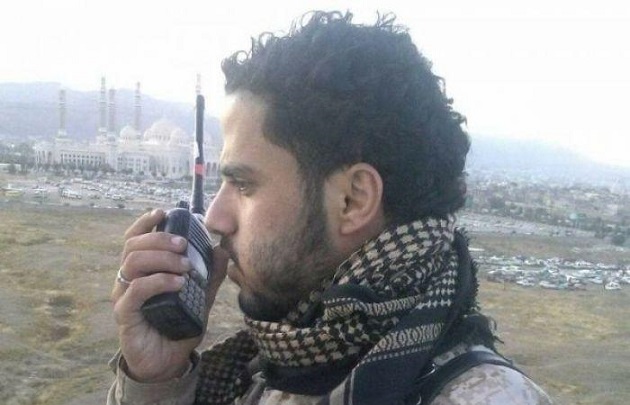 Damaged sports infrastructure in Yemen and war-resultant economic conditions are undoubtedly main reasons for athletes' involvement in fighting, said Dr. Mohamed al-Nedhari, assistant professor of sports media at Bayda University. "Sportspersons should be refrained by all parties from any political conflict."

To conclude, the absence of sports activities and the presence of bloody conflict have facilitated the involvement of youth and sportsmen in ideological entities, which portend looming catastrophe putting, not only the sports, but the whole Yemeni community in jeopardy when war comes to an end.