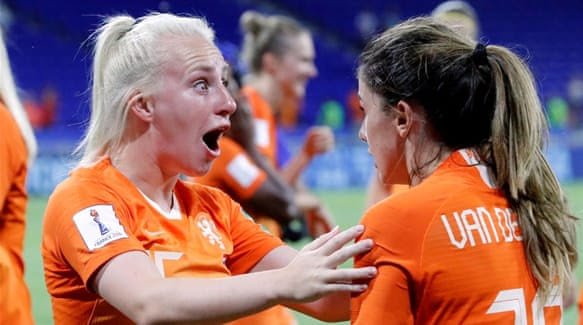 A long-range strike from Jackie Groenen sent European Champions the Netherlands into their first women’s World Cup final as they edged Sweden 1-0 after extra time in their last-four clash on Wednesday.

The 24-year-old midfielder scored in the 99th minute when she collected a deflected pass outside the box and struck it expertly into the bottom right corner of the goal to put the Dutch into Sunday’s final against holders the United States.

“I saw a nice angle. We’ve been discussing this for a couple of weeks now, that I need to take shots more often. The ball just came really nicely, and I thought, ‘Let’s do this’,” the goalscorer said.

“We are going to rest a lot first but now first a party. Sunday in the final — unbelievable,” said coach Sarina Wiegman, herself a former Netherlands midfielder who amassed more than 100 caps in a 14-year playing career.

That was before the Dutch, playing in only their fifth major tournament, became the force they are now.

The game marked the first time a women’s World Cup semi-final had gone to extra time and it proved a tight contest between the two sides, who last met in the quarter-finals of Euro 2017 when the Dutch won 2-0 before going on to win the competition.

While the 48,452 spectators in attendance fell a few thousand short of those who watched the U.S. beat England 2-1 the previous evening, there was still a cacophony from ‘ultras’ of both Sweden and the Netherlands behind each goal.

The match build-up had focused on the talented Netherlands forwards such as all-time top scorer Vivianne Miedema (60 goals) and the pacy attack of 2016 Olympic silver medalists Sweden, featuring Stina Blackstenius who had scored the winner against Germany in the previous round.

However, it was the goalkeepers who found themselves the busiest players throughout the regulation 90 minutes.

Sweden were the brighter side in the first half but could not find a way past Netherlands stopper Sari van Veenendaal.

The captain routinely tipped over dangerous inswinging corners and instinctively saved with her foot a close-range toe poke from Lina Hurtig shortly before halftime.

The Netherlands had to replace Lieke Martens, still suffering with a toe injury, with Jill Roord at the break but then the match began to open up.

Sweden defender Nilla Fischer hit the post 10 minutes after the restart and Miedema had her header tipped on to the bar by the fingertips of Hedvig Lindahl.

The 36-year-old keeper, who most recently played for Chelsea in England, was equal to the threat of a Dutch side who grew in confidence, particularly with the introduction of Olympique Lyonnais’s Shanice van den Sanden who flew down the right wing.

Lindahl tipped over a fierce strike from the pink-haired Van den Sanden in second-half stoppage time. However, her resistance was finally broken by an excellent quickfire strike from Groenen in the first period of extra time.

The midfielder, who will feature for Manchester United in England’s top flight next season, chose the perfect time to register her first shot on target and first goal of the tournament.

Despite playing in only their second World Cup, the Netherlands keep their incredible journey going with a final date against the record three-time world champions on Sunday. They already have a prize in a guaranteed place at their first Olympic Games next year in Tokyo.

Sweden, meanwhile, will take on England in the third-place match in Nice on Saturday but they may be without striker Kosovare Asllani who fell awkwardly in the closing stages and had to be carried off the pitch on a stretcher.

“Now it’s about the medal. Ending up third of course feels a lot better than ending up fourth. We’ll do everything in our power to try to do that,” Sweden coach Peter Gerhardsson said.