Houthis: No official response to our initiative, only vague statements do not show needed levels of attention 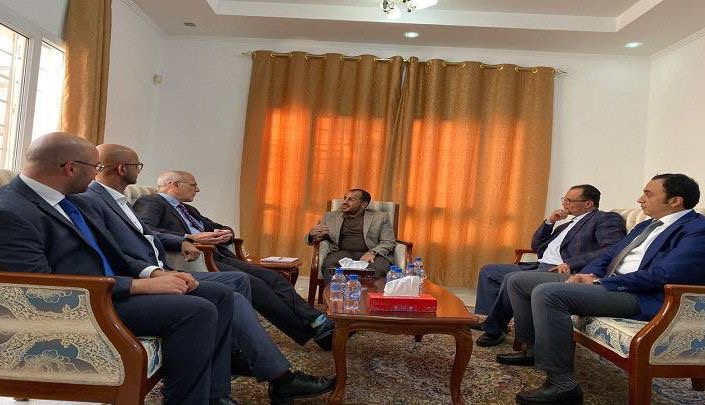 Yemen's Houthi group ( Ansar Allah) said on Sunday that the response of Saudi-led Arab Coalition to the peace initiative recently announced by the group does not show needed levels of attention in response to the peace call issued by Sanaa.

The delegation of the Houthi group, led by the spokesman of the group Mohammed Abdulsalam, during a meeting with the British Ambassador to Yemen Michael Aron in the Omani capital Muscat confirmed that the situation without clear progress towards the Presidential Peace Initiative does not help the continuation of the initiative and turn it to a comprehensive calm if they do not declare a position Clear.

As the Houthi delegation pointed out, that the acts are what the Yemeni people ask for a halt of aggression and an end to the siege, then we can describe this as positive progress.

He considered that the continued detention of oil derivatives ships in the Red Sea is totally incompatible with the agreement of Sweden and with the practical steps provided by the group, from the unilateral redeployment at the ports of Hodeida.

He pointed out that the aggression carried out on Sunday morning, the launching of air strikes on a truck in the city of Hodeida is a clear violation of the Swedish agreement and a negative response to the presidential initiative, which has not received any explicit response so far, as well as the continuation of aggression and siege.

On September 20, Mahdi al-Mashat, head of the so-called Supreme Political Council set up by the group to manage the areas under its control in northern Yemen, announced a halt to all forms of targeting Saudi territory, calling on Riyadh to make a similar announcement as part of a "peace initiative" aimed at concluding a "comprehensive national reconciliation". Under "serious and genuine" negotiations between the various parties to the bloody war in Yemen, which lasted for more than four and a half years.

For more than four and a half years, Yemen has been locked in a bloody power struggle between the internationally recognized government, backed by a Saudi-led Arab military alliance, and Iranian-backed Houthi forces.

The Houthi-run Yemeni news agency "Saba" reported, on Sunday, that the British ambassador asserted that dealing with the Houthi initiative, should be above the current level and serve to promote peace and stability and enter into negotiations to help a comprehensive political solution to end the bloody war. He praised the presidential initiative and considered it a real chance to achieve peace in Yemen.

During the meeting, Ashley Serenji, a representative of the British Department for International Development (DFID) program in Yemen, briefed the delegation on the difficulties facing the work of some organizations in Sana'a and the required remedies to contribute to the delivery of assistance to all beneficiaries.

The Houthi delegation stressed the importance of taking into account any violations or abuses that may occur by some international organizations, both in the quality of the materials that are distributed and in line with the required standards, or through the identification of priorities of food and medicine needed by the Yemeni people who are suffering from severe the siege and lack of basic food and medical .. pointing at the same time that any irregularities or imbalances that may occur in Sana`a will be transferred to the National Authority for the Management and Coordination of Humanitarian Affairs and work to address and overcome.

After the attack, Houthis stated to halt targeting Saudi Arabia, with Saudi reaction on the ground, and the rebels took positive steps by releasing some 300 prisoners, he added.

The UK diplomat express optimism, citing the recent visits by the UN envoy, Martin Griffiths, to Sana'a and Muscat.

Following their cessation offer, Houthis have been relatively anxious, they want to know the Saudi response, Aron said. Therefore, visits and meetings with them in Sana'a and Muscat aim to know their position and encourage them to keep on steps towards peace.

Griffiths' trip to Jeddah one week ago and his meeting with Prince Khaled Bin Salman was also very important.

Although fragile, this progress needs to be sustained, particularly amid the low trust, that the UN envoy backed by the international community including the UK, is currently helping to boost between parties, he added.

Parties understand that the situation on the ground is very bad, people are suffering, and exchanging attacks help no party. So, it's time to go ahead for peace through the UN envoy.