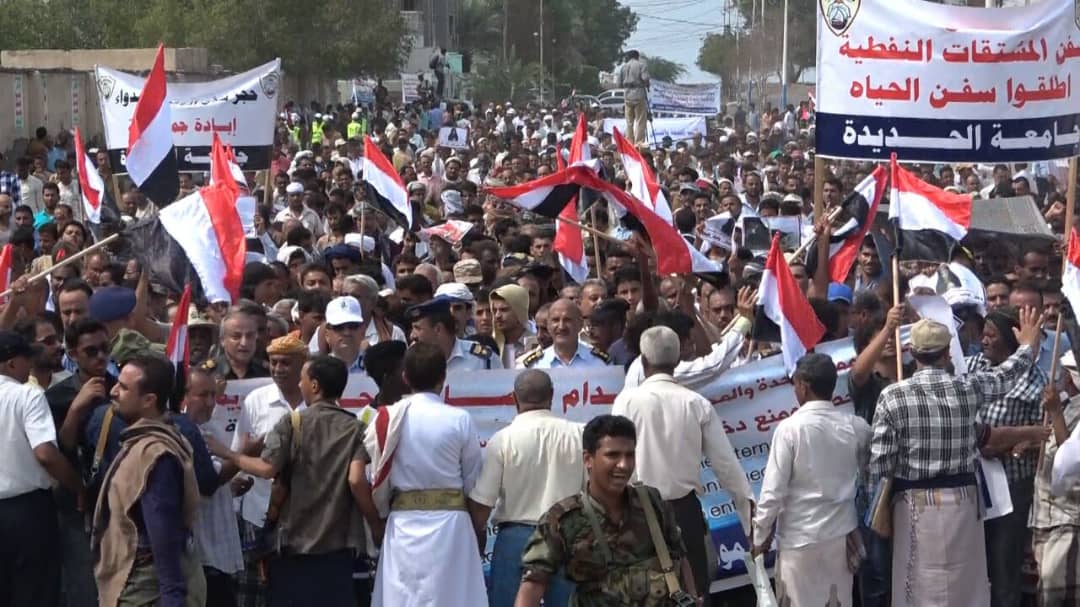 On Sunday evening, residents of the western Yemeni city of Hodeida protested against thedetention of oil and food vessels by the Saudi-led Arab coalition in support of legitimacy and refused to enter the port city under the control of the Houthi Group (Ansar Allah).

The protesters raised slogans condemning the policies of the coalition, which they described as aiming to starve the Yemenis, by "detaining ships of oil derivatives and food and preventing them from entering the ports of Hodeida, which portends a humanitarian catastrophe, including power cuts to hospitals, dialysis centers, cancer, water and other institutions."

The protesters, who went to the UN office in the province, blamed the UN for "full responsibility as a result of its complicity with the forces of aggression in detaining ships, exposing the Yemeni people to genocide," the Houthi-run Yemeni news agency Saba reported.

They considered that "preventing the entry of food ships and oil derivatives is a crime and stigma on the forehead of the United Nations and its humanitarian and human rights organizations and the whole world."

According to a statement issued by the demonstrators, the coalition has been holding off the ports of the province "13 ships loaded with food, medicine and oil derivatives, including the diesel ship for electricity Hodeida 70 days ago."

The Director of the Office of Public Health and Population in the province, Dr. Abdulrahman Jarallah, made an urgent appeal to the United Nations organizations and the Security Council calling for urgent intervention to pressure the coalition countries to allow the detained ships to enter the ports.

Jarallah said: "We are one step away from the discontinuation of machines, dialysis machines, operating rooms, intensive care and recovery rooms in hospitals and health facilities, especially after the death of many patients, the latest of which was three patients at Dar al- Salaam Mental Health Hospital."

The Arab coalition accuses the Houthis of using the port of Hodeida for military purposes and that they receive weapons from Iran through the sea port, while the group denies the charge.

The group said in a statement of the Red Sea Ports Corporation that the coalition accusations an attempt to "justify its blockade on Yemeni ports and obstruct the entry of goods and humanitarian needs."

Hodeida port is one of the most important and largest ports in Yemen, where it is the import and delivery of about 70% of commercial goods and relief in the country.