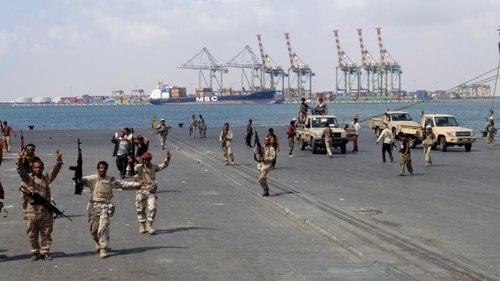 Since the war began in Yemen 5 years ago, the Medi Front in the northwestern province of Hajjah has been one of the strongest and fiercest fronts and has witnessed very violent battles between government forces supported by the Saudi-led coalition forces, and the Ansar Allah group (Houthis).

In October 2018, government forces backed by Sudanese and Saudi forces managed to control large parts of the Medi district overlooking the Red Sea on the Saudi border.

While many people thought that Medi would be an easy way for coalition and government forces to the Yemeni capital, Sanaa, which is controlled by Ansar Allah, the group was able to prevent any significant military progress for the coalition forces for more than two years.

It seems, according to observers, that the Ansar Allah group (Houthis) claiming, on Thursday evening, that there are cases of coronavirus infection, if the news is correct, behind which it is intended to say that the Arab coalition wants to spread the virus in the group's areas of control.

According to the media of the Ansar Allah group (Houthis), a military source confirmed, "The spread of the Coronavirus among the coalition soldiers on more than one military axis, especially the Medi axis."

The source pointed out that "the number of injured 13 people in one of the brigades in the fifth military area in the Medi axis until last Tuesday, in addition to one of the doctors affiliated with the military zone."

He added: "There are deaths due to lack of medical services."

The source expected, "the epidemic's spread will widen due to the Saudi regime's prevention of receiving the infected people in Saudi hospitals."

It is worth noting that the leader of the Ansar Allah group (Houthis) Abdulmalik Al-Houthi had indicated, in his televised speech, yesterday, that there were cases of coronavirus among the ranks of the coalition forces in the Medi Front in Hajjah Governorate, northwest of Yemen.

On Wednesday, the group's health office implemented a training program for medical screening teams targeting quarantine sites in the border outlets of the governorate.

Medical sources said that the program targets 70 trainees of health workers within 7 teams distributed on outlets to receive those coming from outside the country to be subjected to testing and quarantine measures to protect society from the Coronavirus.

In identical statements, the Yemeni health authorities and the World Health Organization confirmed that Yemen was free of any infection with the Coronavirus.

It is worth noting that Hajjah is one of the most miserable governorates in Yemen. If there are cases of coronavirus infection, the situation will be disastrous for the people of the governorate in particular and the Yemenis in general.