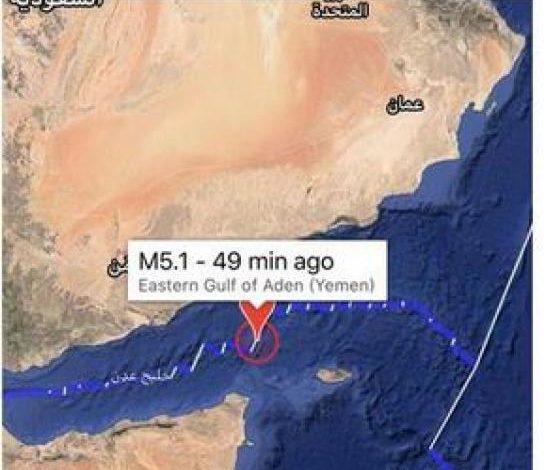 The earthquake early warning system of the Meteorological Department in the city of Hadhramaut, east of Yemen, monitored late Wednesday a marine earthquake in the coasts that mediate the Gulf of Aden.

According to a press release issued by the Department, the regional earthquake monitoring stations monitored the tremor off the coast of the provinces of Mahra and Hadhramout at a strength of 5.1 degrees on the Richter scale (average intensity) at 11:22 pm.

The statement indicated that the coordinates of the tremor were 13.5 degrees north-51.5 degrees east and 10 kilometers away from the nearest point from the southern coast of Yemen by 168 kilometers.

Yesterday, the floods in Aden caused the destruction of homes and property damage, and a number of deaths, including 12 children, according to official government figures.

The Meteorological Department reassured the citizens that, based on the regional tsunami monitoring data, there were no risks from marine or bouncing waves.