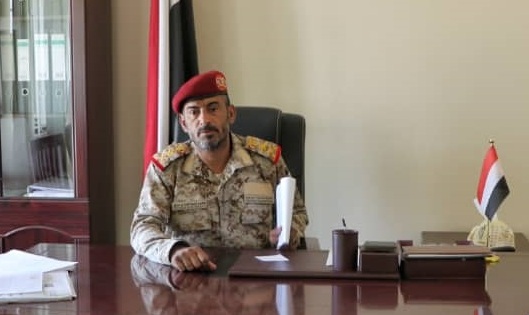 The Yemeni official armed forces will support the tribes in the central governorate of Baydha, official chief of staff said Monday, after massive tension had erupted between the tribes and Houthi fighters.
"The army will provide all help for all Yemen's freemen against Houthis," General Hamood Aziz Bin Sagheer added on twitter, in reply to remarks by Yemeni presidential advisor, Ahmed Obaid Bin Daghr.
The army "should be prepared to support the uprising and assist Sheikh Yasser al-Oadhi, when he asks," Bin Daghr tweeted earlier on Monday.
"Remember, there is one enemy; that is the Houthis. So, let's unify ranks to defeat them," he added.
Last week, Houthi gunmen killed a woman in a district of Baydha, leading to a grave crisis between the tribes there and the Houthi group, before Oman intervened and asked for additional time to solve the tension.
On 29 April, Yasser al-Oadhi, one of Baydha tribal leaders, announced a 3-day time limit for the accused to be handed and Houthi local leaders to be withdrawn from the governorate, calling on all Baydha tribes to get prepared for fighting the group if demands are not met.
The woman, Jihad al-Asbahi, was killed by Houthi gunmen in her house, after the group was unable to arrest her father in law, according to local sources.