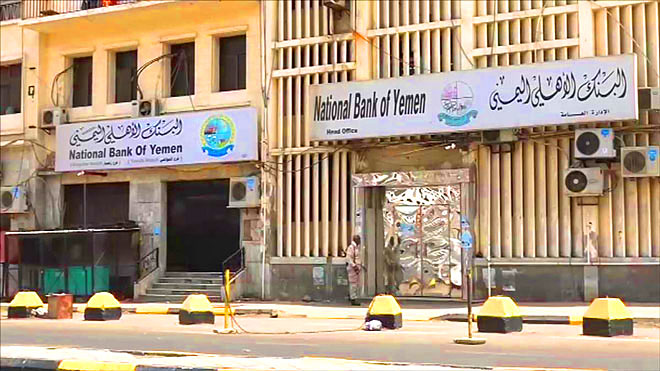 The Yemeni internationally-recognized government has decided to close bank accounts opened by the Southern Transitional Council (STC) to deposit revenues of government offices in the southern port city of Aden.
Hadi government has, in a memo, instructed its ministry of finance to freeze withdrawal and disposal of funds deposited into these accounts.
The government accused the director general of Aden office of finance of "colluding with illegal entity that has no official capacity," and referred him to the Public Prosecution for investigation.
The official government called on all revenue-generating sectors and institutions to not deal with the STC in the capacity of self-rule or any other unofficial body.
Seven government revenue-generating bodies have already opened bank accounts in preparation for transferring the funds to an STC-run account, the Emirati-backed STC said Thursday, in pursuance to its declared self-government.
While the "tax corporation, customs offices of Mualla and Free Zone, the office of senior taxpayers, ports corporation, petroleum company and Aden refinery opened accounts at the National Bank, other institutions are taking the procedures," head of the STC-run economic committee, Abdul Salam Hameed, said.
Government revenue-generating bodies had deposited their revenues at the official Central Bank of Yemen, before the STC decided late last April to open a new account at the National Bank to collect the State's revenues.