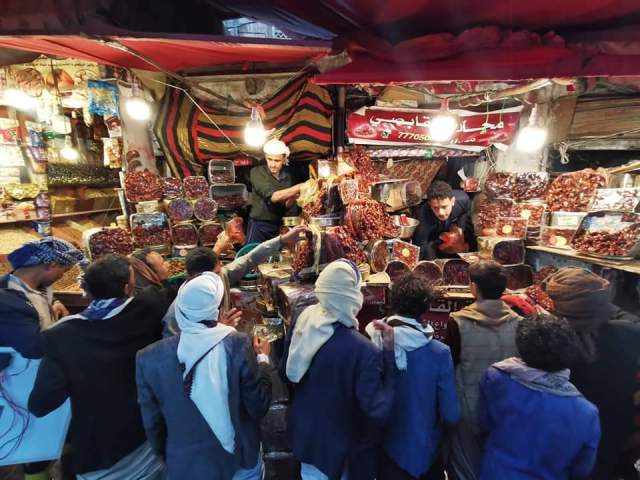 The Houthi group will unlikely impose curfew or inclusively close Sana'a markets, Yemeni firsthand source said Saturday, hours after the second COVID-19 infection was confirmed in the group-held capital.
The Houthi-run combating-epidemics supreme committee had already commissioned a study of partial curfew limited to quarters where the pandemic spread among some of their residents, al-Akhbar quoted the source as saying anonymously.
"The currently-adopted approach means observing precautions, raising awareness via media and monitoring how markets and malls (visited by thousands of people in Ramadan) implement those measures embraced by authorities," the source added.
Early on Saturday, the Houthi health ministry announced the second COVID-19 confirmed case.
The infected, a Yemeni national arriving from Aden, is now "receiving medication at the Sana'a-based Kuwait Hospital," the ministry added in a brief statement.
It called on all citizens to "obey health instructions .. and minimize presence and contact in markets and malls."
On Tuesday, Houthi authorities officially announced the first confirmed case in areas under their control, after a Somali national had been found dead in a Sana'-based hotel.
Early last month, the Houthi health ministry said the virus, if spread in the country, would affect 90% of the total population – including 500,000 critical cases and 70,000 deaths – with infections topping one million in the first two months.
The estimates were based on the war-torn country's low health capacities compared to those in advanced countries, where billions of dollars have been spent to fight the pandemic.
The ministry has developed a plan to turn all the larger hotels and halls, universities' premises and (probably) schools into quarantine centers, if necessary, a source at the ministry said.
The Yemeni internationally-recognized government on Thursday warned against the "Houthi abuse" of COVID-19 spread in northern areas under the group's control, which portends a humanitarian disaster.
The group "manages coronavirus as a political and military issue," the Yemeni information minister tweeted. They "exploit the virus to blackmail international agencies and adopt blackout policy to hide real data on number of infections, putting millions of Yemenis at risk."
Reports on the COVID-19 confirmed "cases in Sana'a and other Houthi-held areas foretell a catastrophe threatening millions of people, amid concealed reality of the situations, politicized issue, and health system unable to provide healthcare for the infected in the first wave," Moammar al-Eryani added.
Medical sources in the capital say tens of COVID-19 infections have been recorded, but the Houthi health ministry rejects to publicize in pursuance of their leader's instructions banning the adoption of the "West policy in reporting on the infected cases, as this would cause panic" among people.
Until Friday, Yemen has recorded 34 cases of the novel coronavirus (including 7 deaths and one recovery) in Aden, Hadhramout, Taiz and Lahj, according to the official government's health ministry.