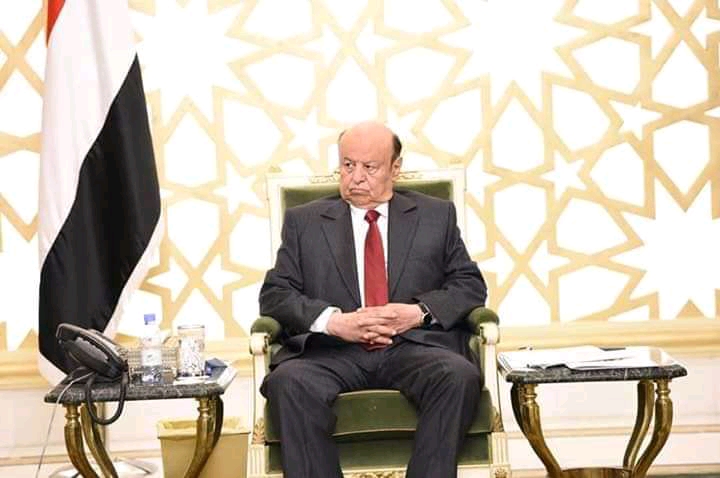 Using arms and force to achieve personal gains and pass projects a given sect, province or party is unacceptable and will not realize a goal, the Yemeni President said Saturday.
"Yemen is living a critical stage, in which its enemies, lurkers and adventurers have contended for abusing its conditions to attain personal, sectarian or provincial gains and accumulate its sufferings without moral or humane deterrence," Abd Rabbu Mansour Hadi added at a meeting in Riyadh with his advisors, senior officials and Parliament speakership.
"The people's eye is open watching everything. This country is of all of us; our homeland .. that we all must maintain as a proud federal republic from Midi to Mahara and from Sa'ada to Hadhramout," he said calling on political and social groups to disdain shortsighted positions.
"We want a federal, secured, stable Yemen with its people living under fair governance and equality. We have chosen national, noble struggle to end the Houthi-Iranian militia-led coup, restore the State and resume our political course .. based on the three references; GCC Initiative, National Dialogue's outputs and UNSC Resolution 2216 and relevant resolutions.
"Our acceptance of the Riyadh Agreement and its full application as stated by its last provision – without selectivity or segmentation – was stemmed from our strong belief that it presents a safe way out of causes and ramifications of mutiny in the interim capital of Aden some other liberated areas, so as to prioritize the uppermost national interest and unite efforts in the face of the Houthi coup," the Riyadh-based Saba quoted Hadi as saying.
Application of the Riyadh pact has been long stalled due to "persistent escalation including the self-governance declaration" along with the recent rebellion in the peaceful archipelago of Socotra.
President Hadi called on the Southern Transitional Council (STC) to make good use of great efforts exerted by Saudi Arabia to resume the Riyadh deal's implementation and stop bloodshed.
He said he ordered ceasefire be fully observed in response to Saudi efforts and to end rebellion against the State.
"We have extended our hands for peace, and the militias have every time reneged pacts and conventions, facing our keenness for peace with further escalation, committing crimes against civilians, attacking cities and making of our country a base to target our brothers with Iranian missiles and drones. They're now responding to UN calls for ceasefire and focused efforts in the face of coronavirus pandemic with more brutal escalation."