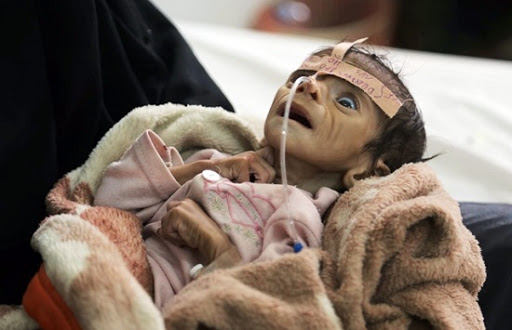 Sana'a (Debriefer) - Survival chances seem limited before Yemenis, as large numbers are feared to join lists of people killed by war or epidemics, yet the risk of hunger stirs UN warnings against its impacts on Yemenis.

More than half of the Yemeni people need food assistances to keep survive, the International Committee of Red Cross tweeted on Saturday.

Earlier on Saturday, the United Nations warned of a famine in Yemen in the coming weeks, if immediate funding is not obtained for its relief programs in the country.

The situation in Yemen cannot be waited, UN Office for Coordination of Humanitarian Affairs (OCHA) tweeted. "Millions of lives should be saved in Yemen, and we should act now.

According to the United Nations, assistances provided by the WFP in Yemen have doubled 12 times since the war outbreak 5 years ago.

Yemen and its 30 million people have been plagued by a war pitting the internationally-recognized, Saudi-backed government against the Iranian-backed Houthi group, triggering what the UN calls the world's worst humanitarian crisis.