Barcelona confirm Koeman as new coach on contract to 2022 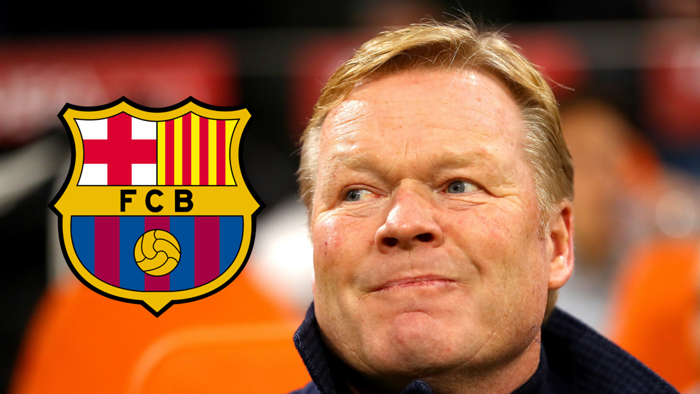 Barcelona have confirmed Ronald Koeman as their new permanent head coach on a contract set to run until 2022.

The Dutchman has left his post in charge of the Netherlands national team to replace Quique Setien in the Camp Nou hot seat.

Barca have released an official statement on their website confirming the news, which reads: "FC Barcelona and Ronald Koeman have reached an agreement for the Dutchman to take over as first-team coach until 30 June 2022.
"The Blaugrana legend, hero of Wembley, the man who handed Barca their first-ever victory in the European Cup returns to Camp Nou.

"This time, however, he will do so as coach as the Dutchman brings more than 20 years of experience as a manager and eight trophies on his CV.

"Ronald Koeman comes to FC Barcelona after coaching in the Premier League, La Liga, the Dutch league, the Portuguese league and also on the international stage with the Netherlands."

Koeman spoke out on his new role while sending a final farewell message to Netherlands supporters following the KNVB's announcement of his departure on Wednesday.

“It was an honour to be the national coach of the Netherlands," said the 57-year-old. "For the past two-and-a-half years I have done everything I can to achieve successes with Oranje.

"I look back with pride on what we have achieved together in that period. The Dutch national team has a bright future, I am convinced of that.

"Everyone knows that Barcelona is my dream club. It feels very special to me to be able to become a coach there."

KNVB football director Eric Gudde added: “We regret Ronald's decision, but respect his choice. He has given Orange colour to the cheeks again."

Koeman played for Barca at the height of his playing career between 1989 and 1995, winning four league titles and the European Cup, scoring the winning goal in the final against Sampdoria at Wembley in 1992.

He has now returned to club management for the first time since leaving Everton in 2018, and will be tasked with steadying the ship at Camp Nou following a disastrous 2019-20 campaign.

Ernesto Valverde lost his job in January, despite the club being top of the table in La Liga, with ex-Real Betis boss Setien drafted in as his successor.

Barca went on to surrender their Liga crown to arch-rivals Real Madrid, before suffering an embarrassing 8-2 Champions League quarter-final defeat at the hands of Bayern Munich.

Setien's sacking was made official on Monday after a week of intense media scrutiny at Camp Nou, and technical director Eric Abidal was also relieved of his duties ahead of Koeman's arrival.