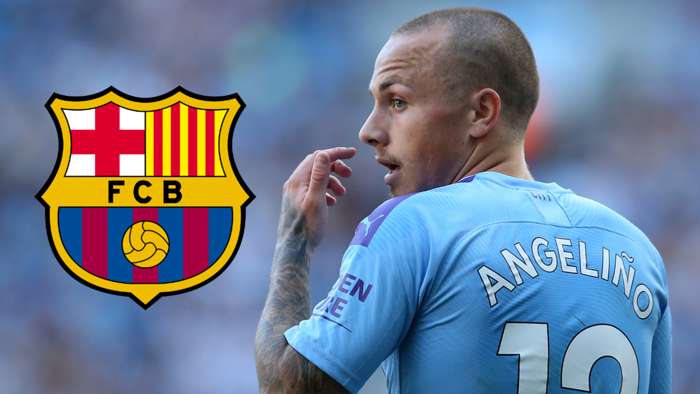 Debriefer-goal -The full-back spent the last seven months on loan at RB Leipzig, with the Bundesliga club keen to sign the Spaniard on a permanent deal
Barcelona have shown an interest in Manchester City full-back Angelino, who is available for around €30m (£25m/$33m).

The Spanish full-back spent the second half of last season on loan at RB Leipzig and helped the German club to the semi-finals of the Champions League.

Barcelona are looking to rebuild after sacking coach Quique Setien following their humiliating 8-2 defeat to Bayern Munich in the Champions League.

Ronald Koeman has been appointed as the new coach at Camp Nou and needs to strengthen after Barca also lost out on the Spanish title to Real Madrid.

The Spanish giants have already made young City centre-back Eric Garcia their top target, with the 19-year-old in the final year of his contract at the Etihad Stadium.

And according to sources, the Spanish giants are now keen on his team-mate as Koeman looks to address the problems in their defence.

Leipzig had an option to buy Angelino and Goal reported that they were keen to strike a permanent deal if they could renegotiate the asking price.

Julian Nagelsmann confirmed this week that the Bundesliga club would like to complete a deal for the 23-year-old after both clubs were knocked out of Europe.

"I'm very confident that we can reach an agreement with Manchester City, now that both clubs are out of the Champions League and the focus is no longer on the tournament," Nagelsmann told German newspaper Bild.

"Angel is a very interesting player for us and he wants to stay with us.”

City re-signed Angelino from PSV for €6m in the summer when they triggered a buy-back clause after an impressive season that saw him contribute 10 assists for the Dutch club.

The left-back position has been a problem area for Pep Guardiola, with Benjamin Mendy fighting his way back to his best form after a serious knee injury and Oleksandr Zinchenko and Joao Cancelo deputising in the role.

Article continues below
Angelino first signed for City in 2012 but spent much of his time away from the club with loan spells at New York City, Girona, Real Mallorca and NAC Breda before his 12-month switch to PSV.

He had a poor pre-season with City and didn’t make his first Premier League start until November, and was a surprise starter in the defeats to Liverpool and at home to Manchester United.

Barca are facing a summer of upheaval with there doubts over the futures of many of their first-team players including Lionel Messi, Ousmane Dembele, Luis Suarez and Gerard Pique.