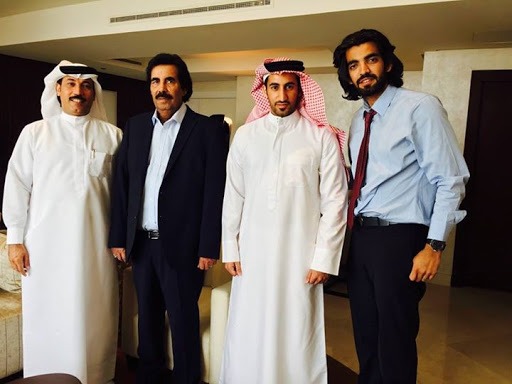 By Abu Al-Ghayth Hasan - SANAA (Debriefer)--Hani Al-Beidh, son of former vice president of the republic of Yemen Ali Salim Al-Beidh, has come out to express support to the southern transitional council's call for separation of the south amid political unrest bearing the hallmarks of the UAE in the eastern province of Hadramout.
He is taking advantage of his origins from a province which is clinging to the legitimate president and government and a federal Yemen and rejecting bids to drag it into chaos and violence after other southern provinces.
Observers told Debriefer Al-Beidh's actions imply intentions of his family to come back to politics.
He is a pawn used by the UAE, some observers argued.
The UAE wants Al-Beidh to play a vital role and have influence in south Yemen, especially in Hadramout, which the Gulf state is seeking to subjugate, observers said.
The return to a political scene controlled by foreign players after a long time away appears to be a thoughtful move and comes within ambitions to control the wealth resources in south Yemen.
But his success can't be guaranteed because he does not have a political history which qualifies him to take the lead in a very complicated situation. He is just trying to make a fuss no matter how negative or positive that is.
On Monday, he called on the UAE-backed southern transitional council to suspend the negotiations with the internationally recognised government, criticising the council for not freezing the negotiations early.
"Amidst escalation, breaches of ceasefire and renewed clashes in Abyan province, the council should suspend the negotiations with the legitimate government. This is the simplest right of negotiation taking into account that the government is responsible for firing on the southern forces and resuming battles," he wrote on Twitter.
Fading presence in burning situation
UAE-based Hani is trying to have influence in the south after his years-long silence.
The first sign for the sons of the south and those watching the commitment of the government and the Islah Party to the outcomes of the Riyadh negotiations and whether Saudi Arabia can guarantee the implementation of the outcomes is to facilitate the mission of the governor of Aden, he said. "Unfortunately, this is not happening".
President Abdrabbuh Mansur Hadi appointed a new governor and police chief for Aden from the council shortly after the government and the council accepted a Saudi-proposed mechanism to accelerate the implementation of the Riyadh Agreement in late July. The agreement was signed by the two sides in November.
Al-Beidh urged the council to be an unchained political force, saying, "Sometimes it requires a leading political force to announce steps beyond calculations of other parties".
"For example, the declaration of the south self-rule led to the Riyadh Agreement 2 and made the legitimate government be committed to it. Moreover, the Saudi-led coalition and the world now have the council in their calculations," he elaborated.
The implementation of the mechanism to accelerate the Riyadh Agreement is still facing challenges, mostly the implementation of the military and security part.
Shortly after the mechanism was accepted, Al-Beidh attacked the council for rescinding self-rule of the south and accepting to share power with the government.
The idea of quotas will put leaders of the council in the quagmire of the government, he said.
The council should have insisted on a fair share in the government to guarantee the sovereign rights of the southerners without detraction and to build on that as a fundamental condition for any final political settlement, he said.
Proactive remarks and counterdemonstrations
Al-Beidh's remarks coincided with renewed clashes between the government and STC forces in Abyan province despite the ongoing negotiations between the two sides in Saudi Arabia and the presence of a Saudi committee in Aden to oversee the implementation of the military and security part of the Riyadh Agreement.
Moreover, his remarks came ahead of mass demonstrations called by the southern national alliance in Seiyun city of Hadramout in support of the legitimate president and government and the establishment of a federal Yemen.
The success of the alliance to organise the demonstrations has proved it can send a powerful and clear political message that was expressed in a tweet by current advisor to president and former prime minister Ahmed Ubaid bin Dagher that said: "Heroes of Hadramout today have won a victory for their freedom, nation, dignity, Yemeni identity and their right in wealth and power".
"They chanted" Here is Yemen, here is the great country, legitimacy and the federal state," bin Dagher tweeted.
Since March, Al-Beidh has been trying to prove his presence in the political landscape, expressing his views mostly on Twitter including his rejection to the STC's negotiations with the government and calling for restoring the pre-unity republic of the south.
Return after long political dormant
After his loss of the 1994 civil war, Al-Beidh, the father, settled in Oman and sometimes in Lebanon. He has stayed away from politics and did not appear except in a single TV interview in Geneva on the first anniversary of the civil war.
On 21st May 2019, he came out to call for a news conference in an Austrian city to declare the separation of the south.
The resignation of former president Ali Abdullah Saleh in 2012 following a popular uprising provided Al-Beidh with the opportunity to take advantage of the political and economic unrest and call for separation.
But he has collided with new southern faces that played vital roles in Yemen in general and in the south in particular during the war. These faces are backed by regional countries that backed the separation in 1994.
It seems he is trying to come back to politics again but this time through his son Hani, who is receiving support from the UAE.