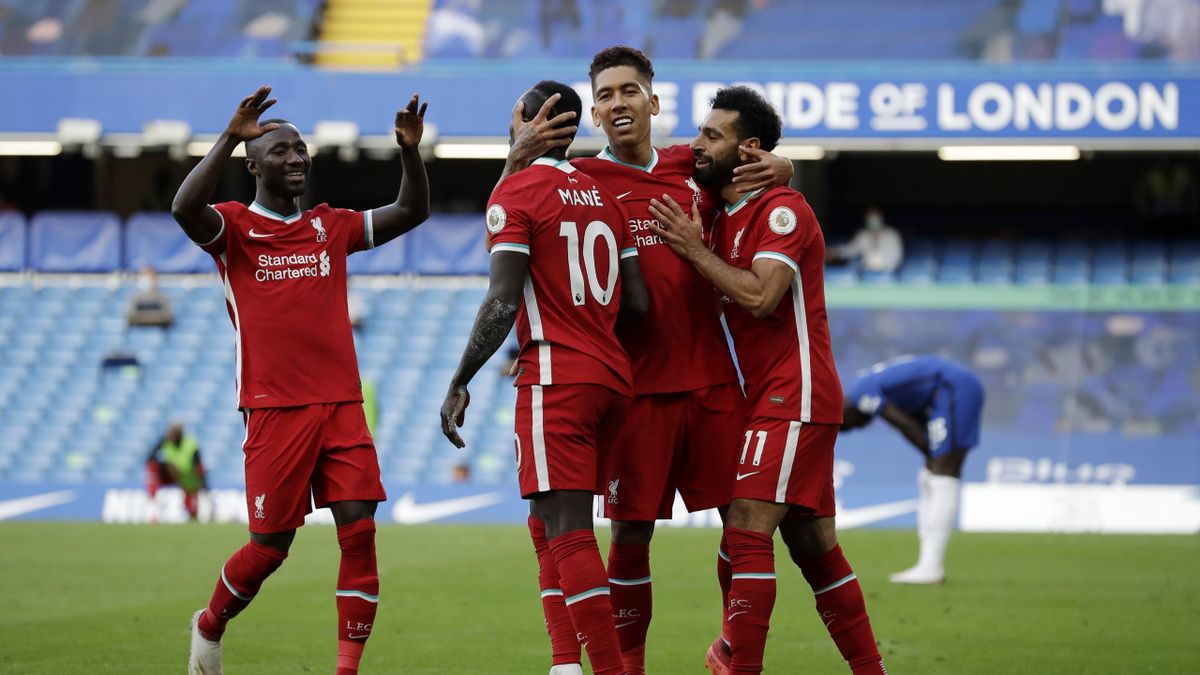 Sadio Mane scored two as Liverpool made an early statement of their intent to retain their title with a confident 2-0 victory at 10-man Chelsea.

The Senegalese forward headed in a superb second-half opener before doubling his tally four minutes later when he showed great work-rate to chase down Kepa and force a shocking error out of the Blues stopper.

It all turned the champions’ way after a cagey first period of few openings exploded into life on the stroke of half time. Andreas Christensen’s caution - for tumbling Mane as he raced through - was quite rightly upgraded to a red card by VAR.

It proved to be a major moment in the game as Liverpool, who were already dominating and restricting Chelsea to occasional counter attacks, took firm control through Mane’s brace.

The Merseysiders brought on new signing, Thiago for his debut at the interval, but he almost gave Chelsea a lifeline when he tripped Timo Werner in the area 15 minutes from time. Jorginho stepped up but saw his perfect record from the spot come to an end thanks to Alisson’s smart save.

Next up, the two sides are in League Cup action in the week. Chelsea host Barnsley on Wednesday while Liverpool travel to Lincoln on Thursday.

TALKING POINT
Chelsea come up short as Liverpool demonstrate just why they are champions. For all the talk of Chelsea potentially laying down a marker, this was a mature and confident performance from Jurgen Klopp's men. Fabinho was magnificent at centre back, allaying all pre-match concern over his makeshift partnership with Virgil van Dijk. Instead, it was at the other end where a more recognised central defender was caught out for a red card that proved crucial to the outcome.

Liverpool could easily have scored further goals and Chelsea’s penalty came from complacency more than anything. The fact it was as a result of new recruit Thiago’s clumsy tackle was perhaps a surprising side note. He looked immediately at home in the Reds' midfield and at ease with the expectation that comes with his arrival.

Of course, it’s hard to fully judge Chelsea at this point. They played 45 minutes with 10 men and were missing some signings, especially in defence with Thiago Silva and Ben Chilwell still to come in. It also looks like Kepa’s time is up - and many Blues supporters will be delighted by that. Edouard Mendy appears set to move to the Bridge with Frank Lampard already convinced he needed a new stopper before another shocker from the Spanish keeper here.

MAN OF THE MATCH
Sadio Mane (Liverpool). The forward’s contribution was decisive. His run forced Christensen to commit the foul for the red card and then he opened the scoring with a wonderful header. His second was all about fantastic work ethic as he responded to his own loose pass to pressure Kepa and take advantage of the howler that allowed him to seal victory.

45' – CHELSEA RED CARD! VAR intervenes and Christensen's yellow card for bringing down Mane as he raced on to Henderson’s sensational ball through the middle is changed to a red. The hosts are down to 10!

50' – Chelsea 0-1 Liverpool. Mane breaks the deadlock with a firm header into the far corner after Firmino had exchanged a one-two with Salah and crossed beautifully from the right.

54' – Chelsea 0-2 Liverpool. Mane at the double! He pounces on Kepa's terrible pass and flashes the ball into the back of the net.

75' – CHELSEA PENALTY SAVED! Alisson dives to his left and keeps out Jorginho's spot kick. The penalty was awarded after Thiago caught Werner’s heel as he charged into the box.

KEY STAT
Christensen is the first player to be sent off in a Premier League fixture between Chelsea and Liverpool since Frank Lampard in February 2009.

Mané is only the third Liverpool player to score a PL brace at Stamford Bridge, after Steve McManaman in December 1995 and Philippe Coutinho in October 2015.

Jorginho missed a penalty for the first time in nine attempts for Chelsea in all competitions, while this was Alisson's first penalty save for Liverpool since joining the club (three faced).