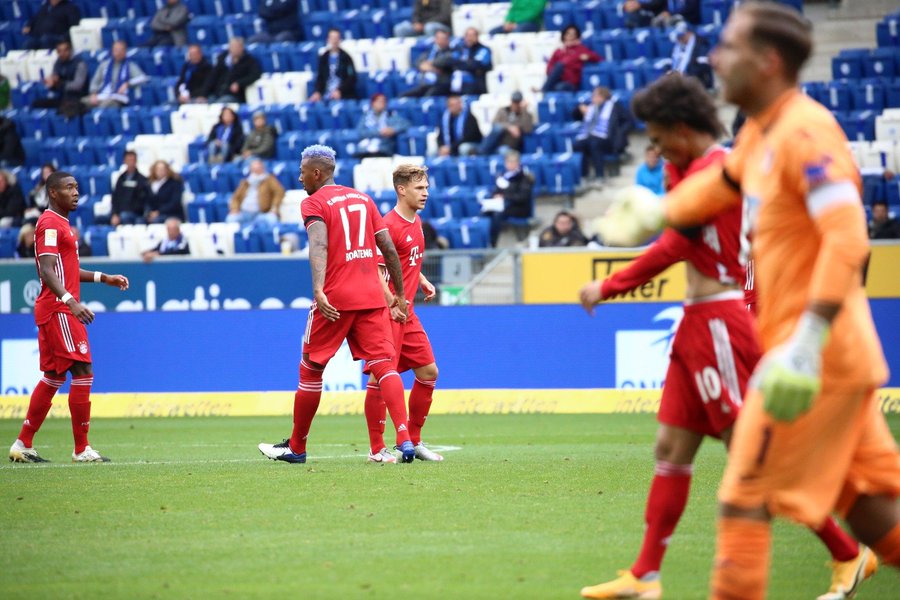 Bayern Munich's 32-match unbeaten run across all competitions has come to an end in a deserved 4-1 defeat at Hoffenheim, also halting a run of 14 consecutive Bundesliga wins.

Hansi Flick's men were taken to extra-time before winning the UEFA Super Cup against Sevilla on Thursday, but in Sinsheim three days later the champions were far from their best as they missed the opportunity to claim a record 11th successive Bundesliga away win.

Hoffenheim were far superior to Bayern in the first half, with the visitors arguably lucky to only trail by one goal at the interval as Joshua Kimmich pulled one back after Ermin Bicakcic and Munas Dabbur had put the hosts 2-0 up.

Joshua Zirkzee, starting to allow Robert Lewandowski a rest, hit the crossbar early in the second period, though it only provided a momentary boost as Andrej Kramaric put the result beyond Bayern with two goals in the final 13 minutes to inflict a first defeat on the champions since December, and in emphatic style.
Perhaps still recovering from their exploits on Thursday, Bayern looked particularly sluggish early on and Hoffenheim deservedly took the lead as Bicakcic glanced home Dennis Geiger's corner delivery.

That shock was not enough to jolt Bayern into life and eight minutes later they trailed 2-0 – Benjamin Pavard inadvertently put Dabbur through on goal as he tackled Christoph Baumgartner, and the Israel striker lifted a disguised chip over Manuel Neuer.

Bayern survived two more scares before capitalising through Kimmich's gorgeous 20-yard effort that went in off the bar in the 36th minute.

Hoffenheim's intensity remained impressive after the restart and they went close twice in quick succession through Dabbur early on.

Bayern almost made the most of those let-offs when Zirkzee hit the bar from an acute angle just prior to being replaced by Lewandowski, as Flick attempted to force the issue.

That change failed to bring the desired improvement and Hoffenheim restored their two-goal lead through Kramaric, who held off Jerome Boateng after receiving Ihlas Bebou's pass and swept into the bottom-left corner.

A determined run from Bebou then resulted in Neuer tripping him in the area, allowing Kramaric to seal a stunning victory from the spot.

What does it mean? Bayern get early wake-up call

Bayern demolished Schalke 8-0 in their first match of the season, but it is fair to say this might be a bit of a wake-up call – it may even come at the right time, potentially guarding against future complacency.

Either way, it was a dismal showing from Bayern, who could only manage four shots on target in the full match – half the amount recorded by Hoffenheim – despite ending the game with a massive 72 per cent of the ball.

Kramaric and Dabbur the inspiration

Hoffenheim coach Sebastian Hoeness, nephew of former Bayern player and president Uli Hoeness, deserves praise for opting to start with two strikers against the Bavarians when he might have been tempted to go on the defensive. Both impressed and caused the visitors no end of issues.

Kramaric ended the game with eight shots and two goals, while Dabbur netted once from four attempts, having also made two key passes.

While there were plenty of issues to highlight with the Bayern defence, they were not much better in attack. Leroy Sane attempted to make inroads at times but was generally disappointing – only one of his three shots hit the target and he supplied just one key pass.

Bayern will need to put this to the back of their minds quickly, as another trophy is up for grabs on Wednesday as they go up against Borussia Dortmund in the German Super Cup, before returning to league action at home to Hertha Berlin four days later. Hoffenheim are next playing at Eintracht Frankfurt on Saturday.