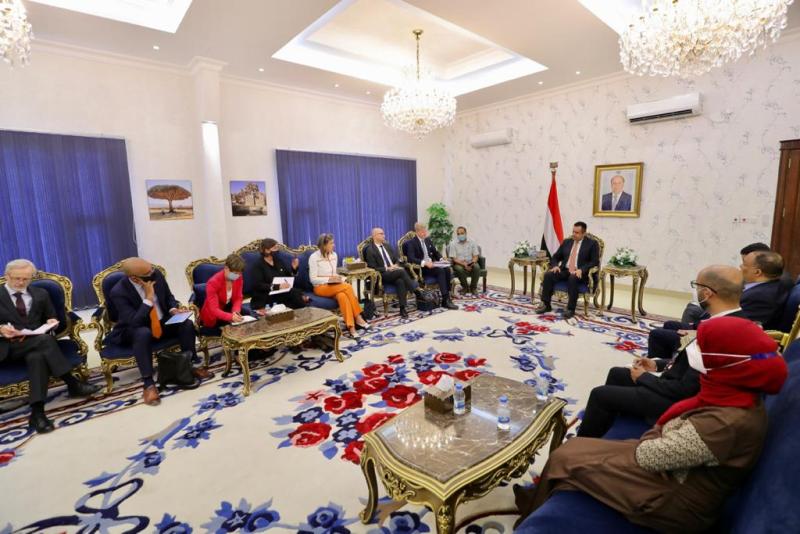 Aden (Debriefer) - Peace cannot be reached with the Houthis without pressures on Iran that uses the group to blackmail the international community, the Yemeni prime minister said Saturday at meeting with European envoys.
The Yemeni government's commitment to peace course depends on the availability of subjective conditions, under the three terms of reference, Maeen Abdulmalek added.
The Houthi group and its supporters in Tehran will not yield to peace without international real pressures, he told the EU diplomats.
"To be frank, the Houthi militia doesn't have its decision. It applies the Iranian regime's agenda in the region, and doesn't care for the Yemeni people's suffering or the war continuation."
The Yemeni PM accused Tehran of using the Houthis to blackmail the international community in other files.
At the meeting, Dr. Abdulmalek received letter from chairpersons of the European Commission and the European Council, reiterating that the EU is strong partner with Yemen and would cooperate with the government in stability and humanitarian support, the Aden-based Saba said.
This is the first official visit by a European delegation to Aden after the new government formation.
Yemen has been racked by an armed conflict that broke out after the Iranian-backed Houthis ousted the internationally-recognized government late in 2014.
Yemen conflict has triggered what the UN calls the world's worst humanitarian crisis, with most of the population in need for a type of humanitarian aid and immediate protection.