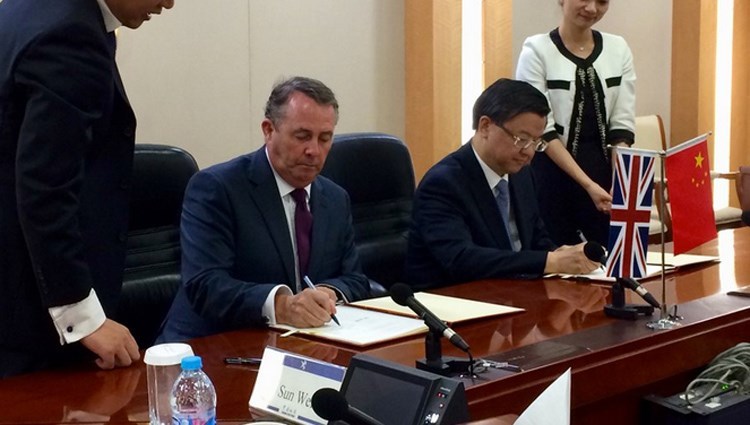 China and Britain have agreed to look at the possibility of reaching a “top notch” free trade agreement after Britain leaves the European Union, China’s Commerce Ministry said on Saturday after talks with British trade minister Liam Fox.

Britain has pushed a strong message to Chinese companies that it is fully open for business as it prepares to leave the EU next year, and China is one of the countries with which Britain would like to sign a post-Brexit free trade deal.

Last month, China offered Britain talks on such a deal.

The two countries also agreed to “actively explore the possibility of discussing a top notch free trade agreement between the two sides after Brexit”, the ministry added, without giving details.

While a trade pact with China would be a political win for Britain’s government, formal talks cannot begin until it officially leaves the EU. Free trade talks typically take many years to conclude.

Zhong added that he hoped Britain would use the opportunity of a major import fair in November in Shanghai, which President Xi Jinping is overseeing, to expand its exports to China, the statement added.

It cited Fox as saying he would be leading Britain’s delegation to the import fair, along with Prince Andrew, a senior member of Britain’s royal family.

Fox said on Tuesday that Britain aims to boost exports to 35 percent of gross domestic product after leaving the EU as it looks to increase trade ties with the rest of the world, but he gave no timeframe for reaching the target.

Fox, a prominent Brexit supporter, has spent much time over the last two years touring the globe promoting the merits of post-Brexit Britain as a trading partner and holding preliminary talks ahead of possible future trade negotiations.