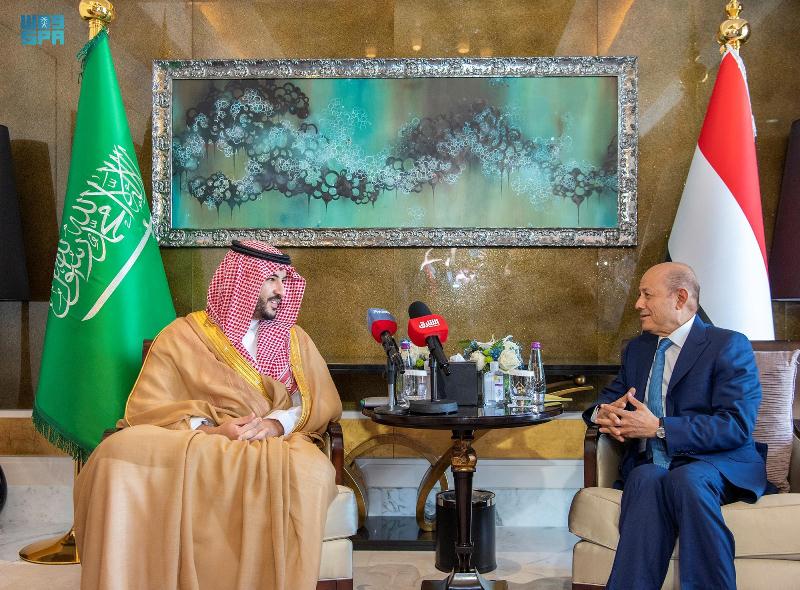 Riyadh (Debriefer) Saudi Arabia on Thursday announced a grant of US$ 400 million in development projects for Yemen, as well as 200 million to provide fuel for power plants, as part of the Saudi-adopted approach to infusing the Saudi and Emirati US$ 3.3-billion funding.
Earlier on Thursday, President of the Yemeni Leadership Council (LC) discussed with the Saudi deputy defense minister potential support to ease Yemenis' suffering.
The meeting also discussed the economic, service, security and military reforms led by the LC, in addition to the Saudi support for these efforts, the Aden-based Saba said.
President Rashad al-Alimi praised the Saudi efforts to restore peace and stability to Yemen, to lessen Yemenis' suffering, to restore the State and to end the Iranian-backed Houthi coup.
The Kingdom reiterates continual development and economic support for the Yemeni LC and government until the State is restored and security and stability expected by the Yemeni people are fulfilled, Prince Khaled Bin Salman said.
The Saudi King and Crown Prince asked for a swift course for support inflow for the Yemeni people and leadership as part of the Saudi-Emirati funds, the Saudi deputy defense minister added.
The approach will be carried out by the Saudi Development and Reconstruction Program for Yemen (SDRPY), and will include 17 development projects and programs.