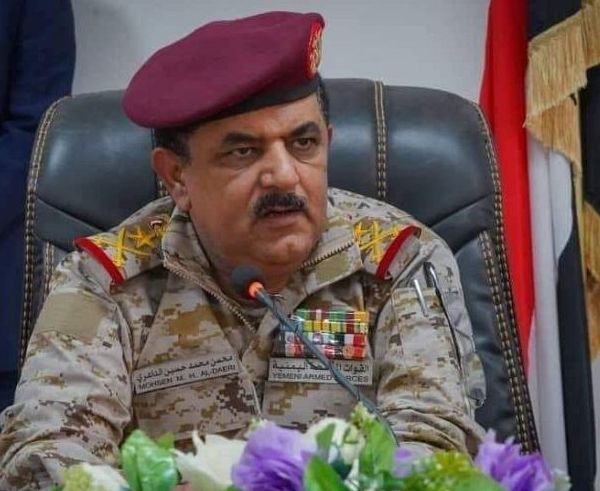 Riyadh (Debriefer) The Iranian-backed Houthi group cooperates with al-Qaeda and Daesh in destabilizing security and stirring chaos in Yemeni liberated provinces, Yemen's defense minister said Monday, calling on the European Union to provide his official government with material support and lobby int'l stances in order to restore the State and stability.
The Houthi group released some terrorist militants and drove them to gov't-held provinces, in an attempt to destabilize security and spread disorder, Gen Muhsin al-Dairi said at his meeting in Riyadh with the EU ambassador to Yemen, Gabriel Munuera Vinals, according to Saba.
All the political entities represented in Yemen's Leadership Council (LC) fight terrorist groups do their best to crush militants threatening the stability, and confront Houthi repeated breaches in different fronts, the Yemeni minister added.
He called for further EU support and efforts to mobilize international stances and enable the legitimate government to restore the State and stability.
At virtual debate organized by the Middle East Institute on Friday, the Yemeni President Rashad al-Alimi accused the Houthis of cooperating with al-Qaeda, citing the group's "releases of many sentenced Qaeda militants, including men accused of USS Cole explosion, who moved to liberated areas to commit terrorist acts."
Many counterterrorism officers were killed in clashes with al-Qaeda in Dhalea governorate, he said, noting that the fighting left 8 militants killed, including two of those released by the Houthi group from Sana'a prisons.
For the Houthis, Alimi remarks "are baseless, and desperate attempt to hide his relations to terrorism," according to the Sana'a-based Saba.
"The whole world knows that Qaeda leaders confessed, in videos posted on their websites, to relations with the aggressive coalition led by America," the Houthi foreign ministry said in a statement.