Trump Blames Federal Reserve As ‘Only Problem’ In U.S. Economy 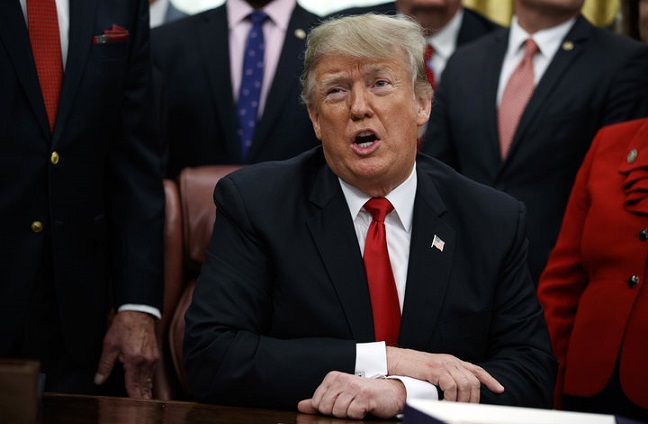 President Donald Trump blasted the Federal Reserve on Monday, describing it as the “only problem” for the U.S. economy, as top officials discussed a rout in stock markets caused in part by the president’s feud with the central bank.

Stocks fell again at the open on Monday amid concern about slowing economic growth, the government shutdown and reports that Trump had discussed firing Federal Reserve Chairman Jerome Powell.

U.S. stocks have dropped sharply in recent weeks on concerns over weaker economic growth, with the S&P 500 index on pace for its biggest percentage decline in December since the Great Depression.

In a tweet that did nothing to ease market concerns about the Fed’s cherished independence, Trump laid the blame for economic headwinds firmly at the feet of the central bank.

“The only problem our economy has is the Fed. They don’t have a feel for the market,” Trump said on Twitter. “The Fed is like a powerful golfer who can’t score because he has no touch - he can’t putt!”

Trump has frequently criticized the Fed’s raising of interest rates this year.

The Trump administration arranged a phone call on Monday with top U.S. regulators to discuss financial markets, the Treasury Department said. Treasury Secretary Steven Mnuchin was to host the call with the president’s Working Group on Financial Markets, known colloquially as the “Plunge Protection team.”

Bloomberg News said regulators told Mnuchin on the call that nothing is out of the ordinary in the markets. Mnuchin also made calls to top U.S. bankers on Sunday and got reassurances that banks were still able to make loans, the Treasury said.

If Mnuchin’s efforts to poll the top banks on their financial health and convene a call of a group of officials who typically meet to address a crisis was meant to soothe markets, that was not evident early on Monday. Wall Street initially traded sharply lower in a shortened session ahead of Tuesday’s Christmas holiday.

All the 11 major S&P 500 sectors were lower, and all the 30 components of the Dow Industrials were in the red.

However, trading volumes were muted, with markets closing at 1 p.m. ET (1800 GMT) ahead of the Christmas holiday and by midmorning the major averages were well off their lows.