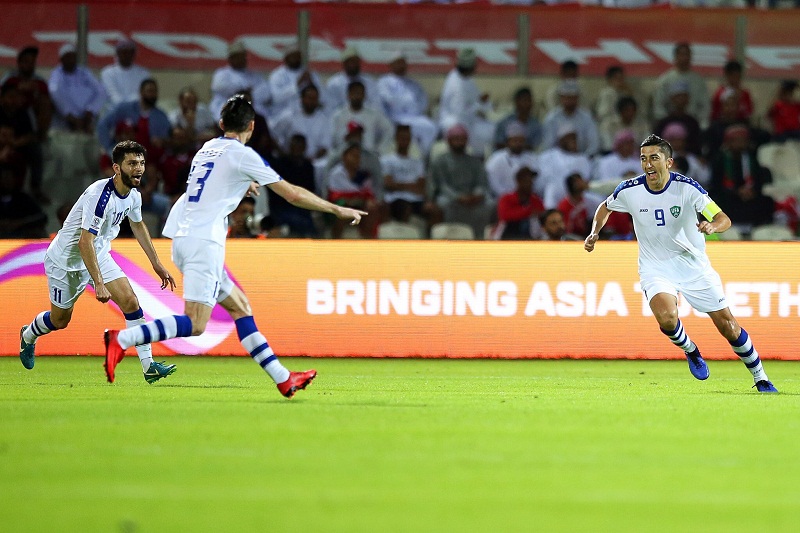 Odil Ahmedov's curling first-half free-kick broke the deadlock at Sharjah Stadium and Uzbekistan were indebted to goalkeeper Ignatiy Nesterov who made a string of saves to keep them ahead.

With victory in sight, Uzbekistan were undone by a fast Oman break that saw substitute Muhsen Al Ghassani score to pull his side level in the 72nd minute.

But Shomurodov caught the Gulf Cup champions napping when he snatched possession and scored five minutes from time to get Uzbekistan off to a winning start despite Egor Krimets' late dismissal.

A foul on Marat Bikmaev just outside the box gave Ahmedov the chance to line up a set-piece and he seized it, bending a powerful low shot around Oman's defensive wall and into the bottom-right corner of the net.

Nesterov made a superb stop to deny Mohammed Al-Musallami on the stroke of half-time, getting down quickly to block the defender's volley with his legs, and Oman continued to push for an equaliser throughout a frenetic second half.

Pim Verbeek sent on Muhsen Al Ghassani and five minutes later he latched onto Ali Al-Busaidi's weighted pass, took a touch with his right foot and scored clinically with his left, sliding the ball under the on-rushing Nesterov's body.

Oman goalkeeper Faiyz Al Rusheidi, who was a late call-up to the squad, blocked Dostonbek Khamdamov's fierce volley but disaster struck for Oman with five minutes left to play.

Shomurodov burst into the box and tried a left-footed shot that Al Rusheidi got a hand to but failed to keep out as he was beaten at his near post and, though Krimets was shown a straight red card for a foul on Al Ghassani, Cuper's men joined Japan in taking maximum points in their first Group F match.