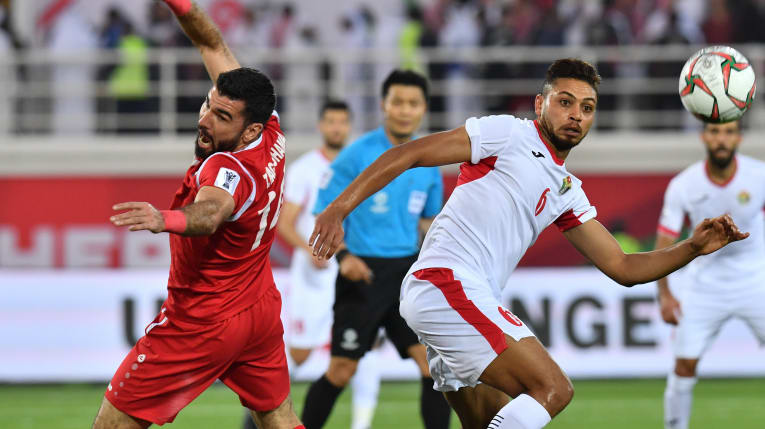 Jordan won a bruising derby with Syria 2-0 to become the first team to reach the Asian Cup knockouts on Thursday, while talisman Chanathip "Messi Jay" Songkrasin hauled crisis-hit Thailand back on track.

In a rowdy atmosphere at a packed Khalifa Bin Zayed Stadium, first-half goals from Mousa Mohammad Suleiman and Tareq Khattab gave Jordan a maximum six points in Group B with one game to go against Palestine.

But on 26 minutes, after a break down the left, the two combined again when Suleiman stabbed home Rawshdeh's shot from close range, triggering deafening celebrations.

Tareq Khattab doubled Jordan's lead two minutes from half-time, when he bundled past Syrian captain Omar Al-Soma to nod in a corner in at the near post.

Syria's Omar Khrbin came close twice after the break, once when his free header cleared the bar and again when he unleashed a shot which went just wide.

Tempers flared when Jehad Al-Baour pulled back Suleiman during play and a shoving match developed on the touchline, egged on by the crowd.

Saeed Al-Murjan's lunge to get on the end of a free kick was somehow kept out by Syrian 'keeper Ibrahim Alma but the job was already done for Jordan, who celebrated joyously with their fans at the final whistle.

Earlier, bleach-blond Chanathip fired Thailand to only a second Asian Cup win in their history as they beat Bahrain 1-0 to reignite their campaign.

The Consadole Sapporo midfielder's second-half strike was enough for the Thais, who sacked their coach Milovan Rajevac after opening with a shock 4-1 loss to India.

Thailand had no shots on target as Bahrain controlled the first half, with Mohamed Jasim Marhoon and Sayed Dhiya Saeed coming closest as they forced goalkeeper Chatchai Bootprom into a sharp double save.

But Chanathip, whose fans compare him to Lionel Messi, seized victory for the War Elephants near the hour-mark with a superbly struck first-time shot that rocketed past Sayed Shubbar Alawi in the Bahrain goal.