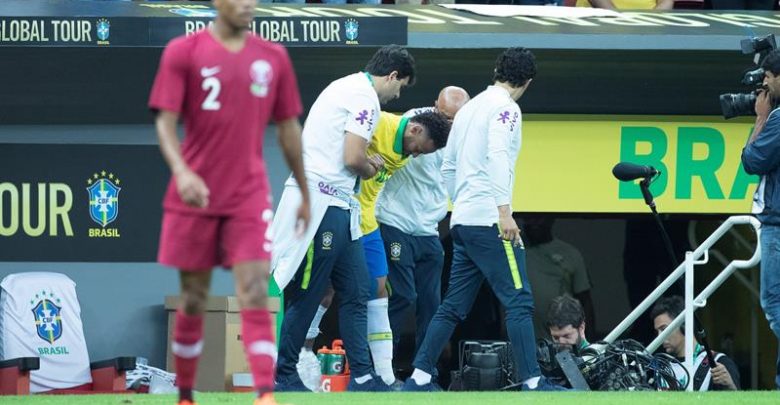 The Paris Saint-Germain forward suffered the problem early on in the friendly win over Qatar, with the 27-year-old in tears as he was taken off

Neymar will miss Copa America after he suffered an ankle injury in Brazil's friendly meeting with Qatar.

The forward will miss Brazil's Copa America campaign due to a ligament rupture in his right ankle in a huge blow for the host nation.

"After suffering a sprain in his right ankle during Wednesday's game against Qatar, Neymar was evaluated and subjected to image tests that confirmed a ligament rupture in the ankle," the CBF said in a statement.

"Due to the seriousness of the injury, Neymar will not have the physical conditions and sufficient recovery time to participate in the Copa America Brazil 2019.

"As of this Thursday, the technical committee of the Brazilian National Team will begin the process of selecting a replacement."

The Paris Saint-Germain star started in a front three alongside Richarlison and Gabriel Jesus as Brazil began preparations for this summer's tournament in South America.

But Neymar was forced out of the match after just 21 minutes after suffering an injury to his right ankle injury as he was tackled by an opponent.

The Brazil star was seen in tears on the bench after the injury and was helped down to the dressing room with the assistance of team personnel.

Prior to suffering the injury, CBF vice-president Francisco Noveletto had suggested that Neymar could miss Copa America amid the rape allegation that has been levelled at the PSG star.

Sao Paulo police confirmed to Goal that there had been a complaint made against the player from a Brazilian woman he met in Paris - an allegation that the 27-year-old has vehemently denied.

Neymar was recently replaced as Brazil's captain, with Dani Alves stepping into the role ahead of this summer's tournament.

The PSG star scored 23 goals in all competitions this season after recovering from a foot injury, with 15 of them coming in Ligue 1.

Brazil had opened the scoring just moments before Neymar's injury, with Richarlison providing the game's first goal in the 16th minute thanks to an assist from Dani Alves.

Brazil, widely seen as one of the favourites to win the tournament this summer, kick-off their Copa America campaign on June 14 against Bolivia in the competition's opener. The Selecao will then face Venezuela and Peru to close the group stages.

Before that, though, Brazil, who failed to progress beyond the group stage in the 2016 Copa America, face Honduras on Sunday in one last pre-tournament friendly.