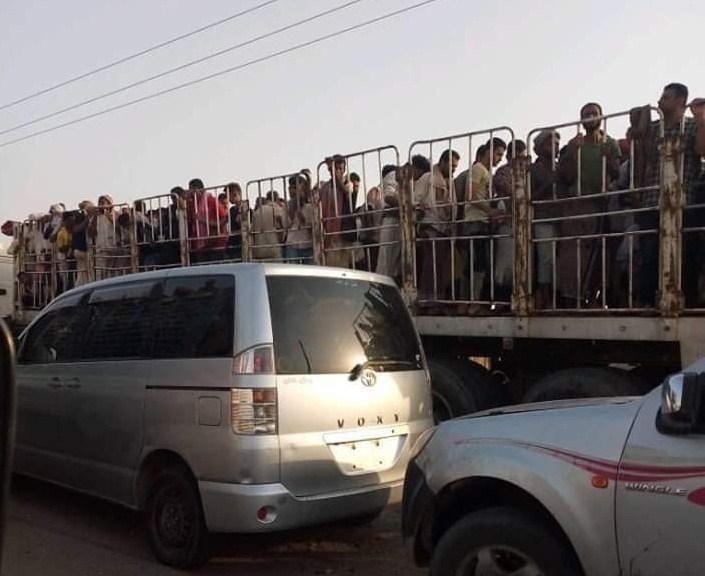 Yemeni President Abdrabbo Mansour Hadi, directed  on Friday to the local authorities and security services in the southern provinces to stop the deportations that affected the northerners of a number of southern cities Against the background of the bloody attacks in Aden last Thursday.

The Aden-based Yemeni' news agency reported that the Yemeni president "directed the local authorities and security services in the provinces of Aden and Lahj and Dali, to stop any practices outside the law and the law against citizens and private property."
The Yemeni president also called on the Deputy Prime Minister and Interior Minister Ahmed al-Maisari and the governor of Aden, Ahmed Salem Robie, to "reject the misdeeds carried out by some on a regional or political basis after the terrorist attacks on the capital Aden on Thursday."
Pro-Emirates forces closed Thursday all land terminals between northern and southern provinces and blocked ports available for departure abroad, amid humanitarian emergencies, with southern activists and Jordanian writer stirring the killing of northerners in the south, local sources said, after two attacks had left at least 49 troops killed.
The Emirati-backed Security Belt (SB) forces in Aden have arrested hundreds of northerners and stormed houses in the nearby of the al-Jala'a (independence) camp attacked by Houthis, the sources added.
SB forces closed land terminals, denying Yemeni northern travellers access to the only two available airports of Aden and Seyoun, as patients in desperate need of medication abroad, said the sources.
These developments come following Thursday missile-UAV double attack claimed by the Houthi group on a military parade for Arab coalition and Yemeni army forces in Aden, seat of the Yemeni internationally-recognized government.
The attack killed 36 and injured other tens, including Muneer al-Yafeie (called AbilYamam), commander of the first brigade in the UAE-backed SB forces, according to interior ministry.
The attack occurred few minutes after a bobby-trapped car had exploded outside a police center in Sheikh Othman, another district of Aden, killing and wounding a number of policemen. No party has immediately claimed responsibility.
Resultant arrests targeted owners and workers of trading stores and restaurants, taxi drivers and displaced people from Hodeida and Taiz, who were taken on large trucks outside the city, over suspicion of providing the Houthis with information on the parade, the sources added.
Tens of the deportees have been living in the city with their families, that were left behind in panic, amid unprecedented deployment of SB forces, said the sources.
Yemenis criticized provocative calls for killing, issued by southern activists and the Jordanian writer Wahid Attoalba, against northerners in the south of their country.
Yemen has been racked by a 4-year bloody conflict between the Yemeni government's forces, backed by a Saudi-led coalition, and the Iranian-backed Houthi rebels who ousted the government in 2014.