Yemen: Hadi gov.t agrees to entry of 10 oil ships to port under Houthis 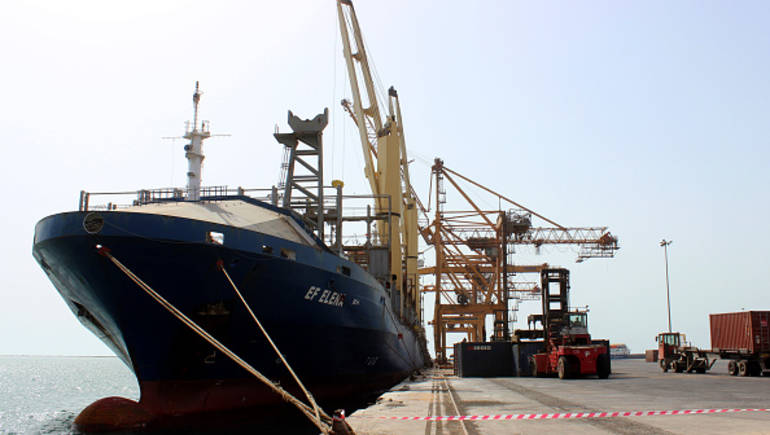 Yemen's internationally-recognized government said on Monday it had approved the entry of 10 ships loaded with oil derivatives into the western port of Hodeida, accusing the Houthi group (Ansar Allah) of obstructing its entry into the group's control.

The Ministry of Foreign Affairs in the Yemeni "legitimate" government in a statement published by the Aden-based Yemeni news agency "Saba" that the Houthis sought to obstruct the entry of ships in order to "thwart efforts to implement the Stockholm Agreement, and to prevent merchants from complying with the implementation of Government Decision No. 49 of 2019, aimed at collecting tax and customs duties and other legal revenues and allocating them to the payment of salaries of civilians in areas under Houthi control."

The statement added that the Yemeni government's initiative to allow ships to enter Hodeida port and unload their cargo comes out of its keenness to accelerate the introduction of fuel shipments to Hodeida, alleviate the suffering of citizens and improve the humanitarian situation in Houthi areas and in response to international organizations.

The government of Yemeni President Abdrabbo Mansour Hadi stipulated "necessity" the commitment to the previous controls of Government Decision No. 75 of 2018, and the commitment of the ten shipowners to pay cash taxes, customs duties and other legal proceeds in accordance with Economic Commission Circular No. 5 (under the Procurement Portfolio issued by the Technical Office) to the Central Bank of Yemen branch in Hodeidah and to provide confirmed notices.

It also stipulated the commitment of the Houthis to allow merchants to complete their procedures directly to obtain the government approval document issued by the Technical Bureau of the Economic Commission, and not to prevent them from submitting any of the required documents or notices of payment of fees according to the system in force in the rest of the ports of the Republic.

It demanded a bimonthly report on the treasury balances in the Central Bank of Hodeida Branch as well as the balances of the account allocated for the supply of those fees.

It called on the United Nations to do its part and assume its responsibility to control these funds at the Central Bank of Yemen branch in Hodeida and ensure that they are not withdrawn or used outside the payment of civilian salaries according to the mechanism that is being worked on to complete and agreed upon, as well as to ensure that the Houthis do not impose or collect any levies or other fees to merchants.

The statement of the Yemeni government "legitimacy" pointed out that this initiative is for ships currently stopped only in front of the port of Hodeida, stressing that any shipments coming thereafter will be subject to the provisions of Resolution 49 according to the mechanism to be agreed upon and adopted with the United Nations later.

The legitimate' government`s decision no. 75 of 2018 requires fuel traders to obtain pre-authorization to import fuel through the central bank in Aden, in order to curb the smuggling of Iranian oil, which the Houthis obtain for free and sell on the black market, to finance its war against the government, according to charges, according to the recent accusations of the Houthis.

The resolution focuses on a set of conditions to ensure that transfers go through the banking system subject to international standards to combat the financing of terrorism and money laundering, as well as reduce currency speculation and help stabilize it.

The resolution No. 49 of 2019 aims to boost the state's revenues, reactivate its sovereign institutions and improve the humanitarian situation in the country, as the government's High Economic Committee puts it "legitimate."

The internationally recognized Yemeni government confirmed Saturday its adherence to its decision to collect customs duties and taxes on fuel imports to Hodeida port as part of its plans to reform the financial system and pay employees' salaries.

The Yemeni government said in a letter sent by its permanent representative to the United Nations, Abdullah Al-Saadi, to the UN Under-Secretary-General for Humanitarian Affairs and Emergency Relief Coordinator Mark Lowcock, that it has succeeded in implementing its resolution No. 49 of 2019 on the supply of customs duties and taxes on shipments of derivatives Oil before importing any shipment in all ports and ports except Hodeida port, because of the pressure of the Houthi group on oil traders in their areas and to make them not to comply with the decision procedures.

The areas under the control of the Houthis, for nearly two weeks, a severe crisis in oil derivatives, where the price of a gallon capacity of 20 liters to 20,000 Yemeni riyals.

The Houthis have repeatedly accused the Arab coalition and the internationally recognized Yemeni government of detaining oil ships and preventing them from entering Hodeida port, a charge both sides deny.

Yemen, one of the poorest Arab countries, has been ravaged by war for more than four and a half years, leading to the "worst humanitarian crisis in the world," according to the United Nations. Famine, the collapse of the health sector and the closure of a large number of health facilities led to outbreaks of disease and epidemics in the country.