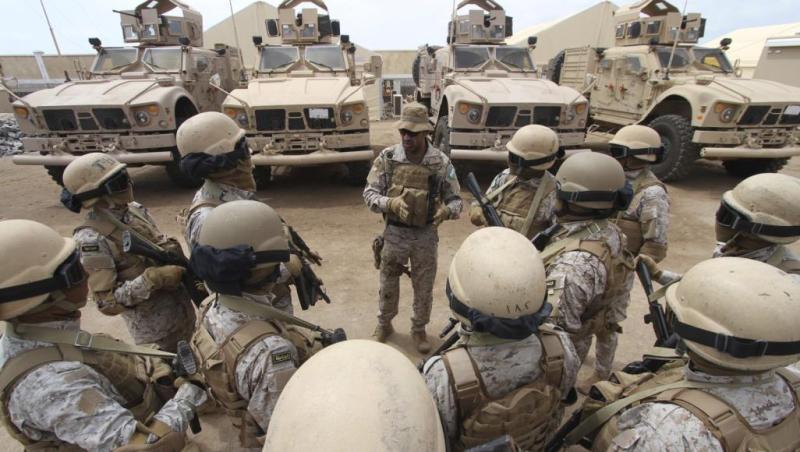 A second batch of Saudi military forces arrived late Tuesday in Aden, as the Yemeni port city gets prepared to be handed by the United Arab Emirates to the Kingdom, and Yemeni expect the signature of Riyadh Agreement between the internationally-recognized government and the Emirati-backed Southern Transitional Council (STC).

The new group of Saudi forces, including Bahraini troops, arrived at Aden port as part of a reposition recently agreed between Riyadh and Abu Dhabi, said local sources.

After their arrival, the military force convoys immediately headed for the Arab coalition headquarters in Boraiqa district, west of Aden, the sources added.

Earlier on Tuesday, a great Saudi vessel arrived at the container terminal in Mualla district carrying hundreds of Saudi troops and officers and tens of modern armored vehicles and other military equipment.

Last week, the UAE withdrew its weaponry from the coalition headquarters following a deal providing for Saudis to assume security and military aspects in Aden.

Last Sunday, the Arab coalition announced repositioning its troops in Aden, to be under Saudi command instead of the UAE forces, in redeployment "consistent to requirements of the ongoing operations."

The Saudi troops deployment comes after the announcement of a deal between the government and separatist STC, a pact criticized by Yemeni interior and transport ministers as a "reward for coup leaders".

The pact is expected to be officially signed Thursday in Saudi Arabia.

Under the pact, the official government would return to Aden, all military forces would be reorganized under the defense and interior ministries, a technocrat political government would be formed in participation of STC, in addition to other military and security arrangements.