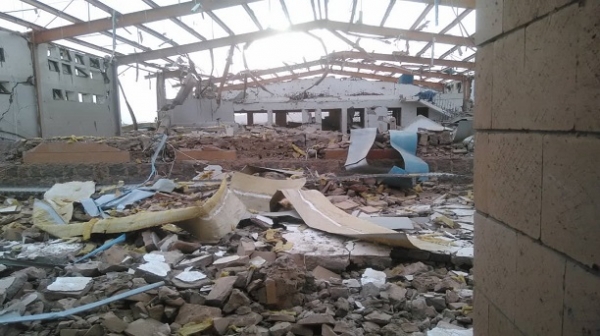 On a recent Wednesday night in June, Saudi Arabia’s embassy emailed members of the U.S. Congress providing them something between a false and misleading account of an air strike that took place in Yemen. Two days earlier, the military coalition led by Saudi Arabia and armed by the United States had reportedly blown up a cholera treatment facility belonging to the international humanitarian organization Doctors Without Borders/Médecins Sans Frontières (MSF). In its email, the Kingdom could not even bring itself to acknowledge that the Coalition carried out the direct attack on the MSF facility. Instead, the Saudis used the passive voice writing that their message concerned a “Cholera Treatment Facility hit in Yemen”—without saying who hit it. The Kingdom’s email highlighted a piece of information meant to let the Coalition off the hook. The email stated, “MSF acknowledged an error they made in not officially informing the Coalition of the new treatment facility’s location,” and the embassy attached a letter that an MSF employee had sent hours after the bombing took place. But by that Wednesday evening, the Saudis knew or should have known that relying on the low-level employee’s letter would be misleading.

This was not the first time for the Saudi-led Coalition to bomb an MSF medical facility in Yemen or to paper over such a dreadful event with falsehoods. With this letter to Congress, however, Saudi public communication efforts reached a new low.

The Saudis must have been especially worried this time around. In the hours following the bombing of the MSF facility that Monday, June 11, Defense Secretary Jim Mattis acknowledged that the U.S. military advises the Coalition of “no-fire areas where there are civilians, where there’s mosques, hospitals.” When asked specifically about the cholera hospital, Mattis said emphatically, “We have to find out what happened there.” Mattis told the gaggle of reporters that he “just got off the phone” with Gen. Joseph Votel, the head of U.S. Central Command, and that Votel’s staff was “scrambling” to determine what the Coalition had done. It was another admission on Mattis’ part that, at least this time, the United States would independently assess the Coalition’s actions, a responsibility which the Pentagon has not always acknowledged.

But the Saudis were right about one thing. The low-level MSF employee had stated in his letter, “I would like to explain that there has been an error from our side as we failed to inform you officially of the location of the new site.” But the Saudis made a serious mistake in using the letter. The MSF employee was wrong about his facts, and the Saudi government knew or should have known that. In reality, MSF had notified the Saudi Coalition 12 times of the coordinates of the cholera treatment center. Twelve. For its part, the Coalition had acknowledged these coordinates at least nine times in writing. The Kingdom omitted that information in its email to Congress.

What the Kingdom’s email also did not say is that MSF’s senior leadership had already expressly disavowed the letter from its employee. The same day that the employee wrote his letter, MSF-Yemen issued public statements, including on social media, calling the strike a “complete disrespect for medical facilities” and saying, “whether intentional or the result of negligence, it is totally unacceptable.” The medical group, in other words, did not accept the blame. What’s more, MSF’s general counsel sent a formal communique several hours earlier on June 13 to the Coalition making plain that the initial letter from the MSF employee did not represent the position of the organization, and setting the record straight on how often the group had provided the coordinates of the cholera facility to protect itself from being bombed. On its website, MSF also explained that the Monday letter “was based on premature and incomplete information and does not represent the official position of MSF.”

Around the same time as the general counsel’s communique, on Wednesday morning (ET), MSF-Yemen tweeted photographic imagery of the rooftops of the buildings prior to the airstrike.

The before-pictures showed buildings that had been clearly marked with supersized MSF and Red Crescent emblems. Based on his own collected images, a researcher with the well-respected investigative group Bellingcat remarked, “Geolocation — and therefore satellite imagery — of the cholera treatment center shows that the red crescent logos were even visible from space.”

A cholera treatment centre in Abs, #Yemen, was struck by a suspected Saudi-led airstrike on June 11. The coordinates of this facility were shared 12 (TWELVE!) times by @MSF_Yemen with Saudi Arabia. And if that wasn't enough, three large medical logos were displayed on the roofs. pic.twitter.com/r7CCrFkTQd

These facts exposed another hole in the Saudis’ attempt at justification. Imagine if MSF had not provided its coordinates. Would a failure to give the Coalition that kind of information mean locations like hospitals, schools, and mosques could then be attacked with abandon? Of course not, and so says the laws of war. The responsibility to avoid bombing protected sites and killing civilians rests with the attacker. And some civilians may well fear that giving the Coalition their coordinates will invite an attack, rather than cause the Coalition to keep them safely on a no-strike list.

What aggravates the problem under the law of armed conflict is when a warring party attempts to cover up responsibility for an ill-conceived attack or to put forward a pretext, for example, by falsely claiming that coordinates were not provided. The laws of war come with an obligation to conduct an investigation when there is good reason to think a war crime may have been committed in carrying out a strike. As Michael Schmitt, a leading expert on this body of law and professor at the Naval War College, told me by email:

I agree. It could also be a serious breach of the bedrock international legal principle of good faith if a foreign military partner deliberately misinformed government officials, including U.S. legislators.

What’s also mind-boggling about this particular instance of Saudi efforts to mislead is not just the attempt to shift blame to MSF but also the quasi-denial that the coalition even struck the medical facility. It’s difficult to understand how one can hold both thoughts at the same time. But that is the nature of disinformation.

The use of the passive voice was not unintentional it seems. The Kingdom’s email to Congress also referred its readers to a press conference by the Coalition spokesperson where he discussed the MSF employee’s letter. The video of the press conference, in Arabic, is available online. During the event, the Coalition’s spokesperson, Col. Turki bin Saleh Al-Malki told reporters:

“This information is incorrect, we did not bomb any medical facility which belongs to MSF. MSF made a rushed decision by Tweeting and blaming us for this attack. As you see on the monitor they apologized to us with this official letter.”

After posting the MSF-Yemen tweets on screen and reading the text of the letter out loud, he added, “I want to repeat again and confirm that we did not bomb any medical facility which belongs to MSF.” Perhaps the spokesperson only meant that the Coalition did not intentionally bomb an MSF facility, but he at least left that matter ambiguous.

The Saudis have taken us down this path before.

“Coalition responses after repeated strikes on MSF-supported facilities have been almost uniformly unhelpful: Faulting MSF, denying they had the right coordinates, while photos show clearly marked logos on roofs and MSF explains coordinates were consistently shared. Tasking the coalition’s official investigative body to look into an incident, a body that clears the coalition of responsibility time and again,” Human Rights Watch’s Yemen Researcher Kristine Beckerle told me. “It’s a particularly pernicious playbook, one that includes attempts to obfuscate state responsibility, to confuse where international legal rules are clear and to ignore the impact certain attacks have even beyond civilian lives lost.”

The Saudi embassy’s message, this time directly to Congress, comes at a time when a greater percentage of Senators than ever before have expressed outright skepticism or repulsion for U.S. support for the Coalition’s activities in Yemen. U.S. support comes in the form of military intelligence, mid-air refueling, and the very munitions later found at bombed-out buildings and marketplaces where there were many civilians killed. In June 2017, the Senate almost blocked an arms sale to the Saudis by a vote of 53-47. One factor that helped overcome the opposition were Saudi assurances that they would spend hundreds of millions to train their armed forces to do better.

Congressional concerns have only grown since. Earlier this month, a bipartisan group of Senators, including the top Republican and top Democrat on the Senate Foreign Relations Committee, sent a letter to Secretary of State Mike Pompeo and Defense Secretary Mattis expressing serious concerns about the ongoing war and an assault on a port city that is estimated will have significant humanitarian costs.

The direct hit on a cholera treatment facility is especially dreadful, as the disease is decimating the population due in large part to how this war is being waged.

Sen. Elizabeth Warren told me this weekend, “The Saudi-led coalition must follow its international law obligation to avoid targeting civilians in Yemen, and we need a thorough investigation of the airstrike on the MSF facility. As long as the United States is refueling and arming Saudi warplanes, we bear some responsibility for this conflict, and we need to hold our partners and allies accountable.”

The Saudi Embassy responded directly to Murphy on Twitter. The embassy posted a copy of the Monday letter saying that it showed MSF “clearly admit that the unfortunate facility incident was due to their failure.” That took it a step further, fully blaming MSF for the strike.

Armed with the facts, Sen. Murphy replied with a tweet thread packed with the information that the Saudis had at their disposal but failed to mention.

The Saudi Embassy ended by saying, “Fortunately no lives were lost in this error.”

Not necessarily. MSF reported that “the airstrike has now rendered the [cholera treatment center] non-functional. In keeping with security protocol, MSF has temporarily frozen its activities” in this area of the country. It is clear that more people will die because of the strike, just not people readily visible to the Saudis or individually identifiable to any of us.