When Saudi Arabia’s ban on women driving ended on Sunday, fashion designer Eman Joharjy and her friends drove to Jeddah’s seafront where they exchanged their car for bicycles.

The colorful, embroidered jumpsuit abayas they donned stood out among the sea of women wearing similar loose-fitting full-length robes but in the traditional black. Yet no one stopped them.

Women in this deeply conservative Muslim kingdom are rapidly gaining more freedoms under a reform agenda spearheaded by young Crown Prince Mohammed bin Salman, who wants to transform the economy of the world’s top oil exporter and open up its cloistered society.

The government recently allowed women to join the security forces and no longer requires them to have a male relative’s consent to open a business. And while now they can drive, they still need permission to get married and travel abroad.

Prince Mohammed laid the ground two years for many social changes, including the return of cinemas and public concerts, two years ago by curbing the powers of the religious police, who used to stop women on the streets and tell them to cover up.

These days at sunset, as the Arabian heat eases, women do sports along the promenade.

“Women feel encouraged by the government support. They are telling them, ‘You can go run and play sports’,” said Joharjy. “But let’s change from a sedentary society to a more active one.” 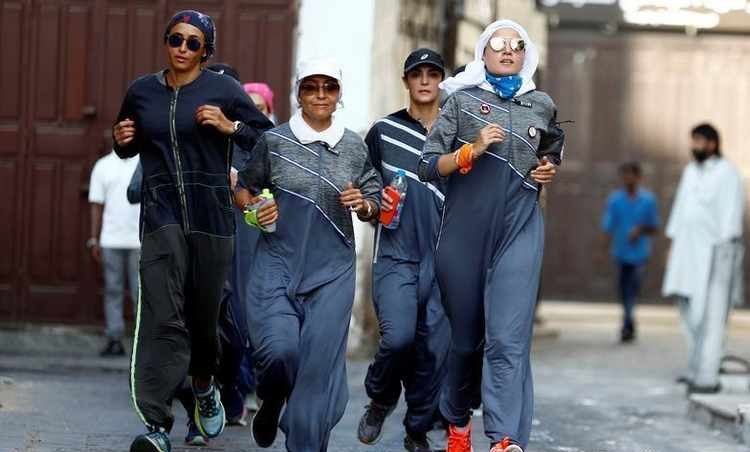 In 2007, frustrated by a lack of abayas made for running or cycling, Joharjy designed one for herself. She began making them for friends and selling what she dubbed the “sporty abaya”.

Colourful racks display designs for different activities like the driving abaya, which features a hoodie, tight elbows to prevent the sleeves from catching on the steering wheel, and shorter lengths to make switching pedals easier.

Most importantly for Joharjy, there is no trace of black.

“They reflect freedom and the willingness to embrace life and make it easy for the modern woman,” she said. “Besides, women love color.”

She is optimistic that Saudi Arabia’s strict social rules will ease further. But she still believes that many women will continue to wear the abaya in one form or another.

For her, the robe is like the Indian sari, a symbol of cultural heritage rather than religion.

“It is protection,” she said. “It protects us from the sun and naughty guys.”