Series of US airstrikes on Al-Qaida sites in Yemeni Bayda 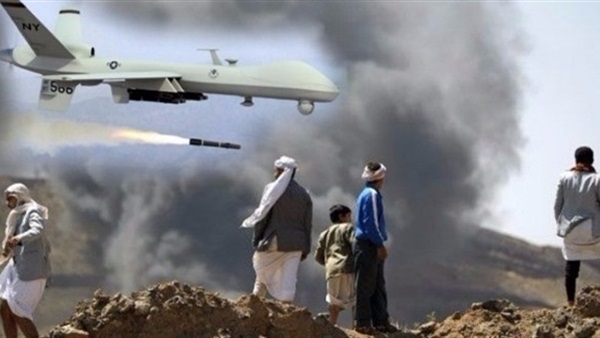 According to Yemeni officials the Associated Press reported that series of US airstrikes targeted alleged al-Qaida positions on Thursday in a mountainous area where three Yemeni provinces meet, leaving at least four militants dead.

The officials told The Associated Press that US jets and drones targeted at least six districts and they were all located in a mountainous area where the three provinces of Bayda, Shabwa and Abyan meet. The vast region is known for its rocky mountains, which have been used by al-Qaida as a hideout.

One media official in Bayda said a total of 23 airstrikes were carried out by US jets. Another official said four al-Qaida militants were killed in the airstrikes that targeted Shabwa‘s Saeed district.

The bombings took place between 2 a.m. and 5 a.m., shaking houses and causing panic among sleeping residents who fled in fear, while smoke billowed into the sky and flashes of light were seen from a distance because of the explosions.

The Yemeni officials spoke on condition of anonymity because they weren‘t authorized to speak to the media.

US military officials were not immediately available for comment.

Thursday‘s airstrikes come a month after US special forces carried out a raid in the same province. In that operation, one US Navy Seal was killed, six American soldiers were wounded and a military aircraft suffered a hard landing and had to be destroyed.

Survivors and witnesses say at least 25 Yemenis were killed in the attack, including 10 children and nine women, sparking outrage in Yemen and prompting the government to ask Washington for a review of the Jan. 29 assault on the district of Yakla.

A week ago, Human Rights Watch called upon the U.S. to carry out an investigation saying that the U.S. needs to “go a step further and provide a full accounting of possible laws-of-war violations.”

Al-Qaida in Yemen, seen as the militant group‘s most dangerous offshoot, has seized large swaths of land and entire cities starting from 2011, the year the mass uprising started and ended with longtime ruler Ali Abdullah Saleh leaving power.

However, the group grew in weapons and numbers after the start of the 2015 Saudi-led campaign that targeted Houthi rebels who seized control of the capital Sanaa, forcing the internationally recognized government to flee the country. Since then, the war exasperated the state of lawlessness and gave al-Qaida freedom of movement and recruitment.

The group has also emerged as a de facto ally of the US-backed Abed Rabbo Mansour Hadi and his backers Saudi Arabia and the United Arab Emirates against the Shiite rebels. The United States has also supported the oil-rich kingdom Saudi Arabia with military advisers, logistics and intelligence in addition to billions of dollars in arms.

Throughout the years, the US has depended on drone strikes in hunting down al-Qaida‘s top leaders and operatives. In 2015, the group‘s leader was killed in a drone strike in the southern city of Mukalla, the provincial capital of Yemen‘s largest province of Hadramawt, and which fell into the hands of the group for a year.