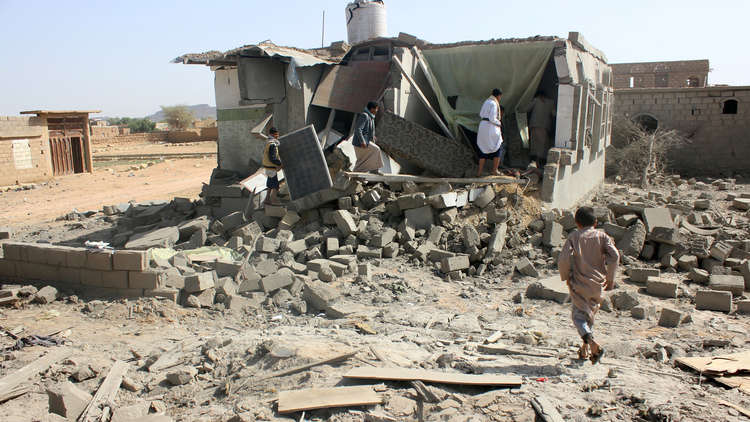 Jane Kinninmont  |Impact Director
When British prime minister Boris Johnson visited Saudi Arabia this week, the primary focus was an attempt to coax its crown prince, Mohammed bin Salman bin Abdul-Aziz Al Saud ("MBS"), into pumping more oil, to compensate for the loss of Russian oil on world markets. Critics asked whether it made sense to reduce dependence on one authoritarian ruler who is at war with his neighbor, by increasing dependence on another authoritarian ruler at war with his neighbor.
Certainly, just a few days after Saudi Arabia’s biggest mass execution in years, and as the Saudi-led military intervention in Yemen nears its seventh anniversary, it is hard to swallow British rhetoric that the Gulf monarchies are a natural part of Britain’s efforts to build a network of liberty around the globe. Yet there are important differences between the Yemen and Ukraine wars that are ignored in commentaries that smack of "whataboutism". The Saudi-led military intervention in Yemen, which started in March 2015, originally came at the official request of the internationally recognized government of Yemen, which had been formed as part of a political transition away from the one-man rule of former president Ali Abdullah Saleh. That government faced a coup by a combination of the Houthis, an Iran-backed militia and political movement, and Saleh, who wanted his power back. This is a very different context from Russia’s invasion to overthrow an elected government.
Moreover, the intervention was broadly authorized by a UN Security Council Resolution, UNSCR 2216, although it was not clear at the time that anyone foresaw this being an open-ended war that would last seven years and counting. However, the conduct of the war has involved many civilian deaths, and the UK in particular has tended to shield Saudi Arabia from the possibility of more critical resolutions at the Security Council, even as concerns have grown about violations of international humanitarian law.
Nonetheless, there are also some interesting political similarities. Saudi Arabia obviously wasn’t just interested in reversing a coup for the sake of saving Yemen’s political transition; in Egypt, by contrast, it had recently supported a coup against an elected government it didn’t like (in 2013, against the Muslim Brotherhood). In Yemen, the Saudi concern was that the Houthis would take Yemen into Iran’s geopolitical orbit. They cited fears the Houthis would become a new Hezbollah poised for attack across their borders. Essentially, they objected to Yemen changing its alignment from being an occasionally awkward neighbour to being aligned with their main rival, Iran.
In geopolitical terms, this has some parallels with how Russia sees the prospect of Ukraine joining NATO: as a means for its rival to gain influence directly on its borders.
Making this comparison does not mean the two things are the same. NATO was not about to attack Russia. Nor was it actually about to admit Ukraine as a member. Instead, Russia attacked  Ukraine at a time when NATO appeared relatively weak and divided, with a new government in Germany and a US administration that had spectacularly dropped its Afghan allies. Far from seeking a pretext to attack Russia, NATO has so far been turning down Ukrainian requests for a no-fly zone.
So why even make this parallel between Yemen and Ukraine, when each case has its own different nuances and contexts? Perhaps the most interesting similarity is that in both cases, the choice to bomb a neighbor, to prevent the neighbor from aligning with an adversary, has so far seemed self-defeating. They seem largely to ignore the cost of turning the neighbor's “hearts and minds” against you for many years to come.
MBS, like Putin, expected that his war would be quick. Both leaders have small decision-making circles and do not like to be told they are wrong. The Saudi entry into Yemen’s civil war in Yemen started nearly seven years ago. Over that seven years, Yemen has not become softer and friendlier, nor has it renounced all ties with Iran. Instead, Houthis have gained the capacity to attack Saudi and UAE with missiles. This is exactly the scenario the war was supposed to prevent.
The Ukraine war is in its early days. But there’s a high chance that this scenario will repeat. Lavrov said the aim is to make Ukraine "friendly"; Russia also talks of wanting to demilitarize it. Maybe one of the aims is to prove to Ukraine that NATO does not have the political will to defend it militarily. But even in the space of three weeks, Russia has turned millions more Ukrainians against it and reinforced the Ukrainian public’s desire to join NATO and the EU.
It’s pretty much impossible to imagine that MBS and Putin would ever have a conversation about their shared mistakes. But there are lessons in both cases about how wars rarely go to plan.
For its part, the UK needs to exert fresh efforts to bring the war in Yemen to a rapid end. The UK cannot just wish authoritarian leaders away, and it undoubtedly needs to work with undemocratic rulers on a substantial number of issues where international cooperation is needed, but it needs more balance and more consistency, especially when it seeks to frame its approach as a freedom-focused foreign policy.
The opinions articulated above represent the views of the signatories and do not necessarily reflect the position of the European Leadership Network or the entirety of its membership. The ELN's aim is to encourage debates that will help develop Europe’s capacity to address the pressing foreign, defense, and security policy challenges of our time.