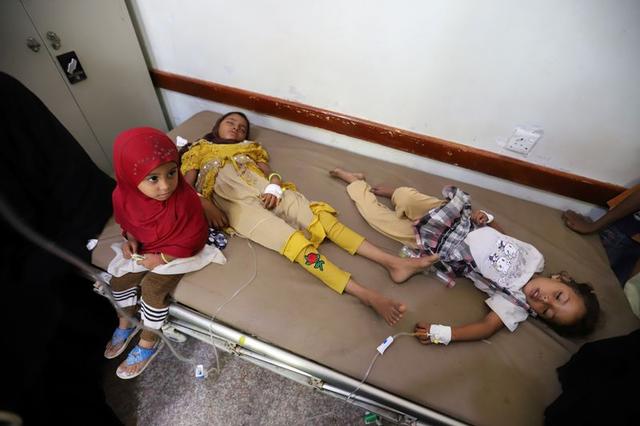 The Dengue fever finds breeding ground in war-weary Yemen, this is a tilte of a report by Reuters news agency highlighted the suffering of the Yemenis from this epidemic, which spread due to the war and difficult living conditions.

Ibrahim Ali al-Jadari’s four teenage daughters lie at home on intravenous drips that will soon run out as they, like tens of thousands of other Yemenis, battle a seasonal surge of dengue fever.

Mosquito-borne dengue is the latest challenge facing Yemenis who have endured almost five years of a conflict that has killed thousands, pushed millions to the brink of famine and caused major cholera outbreaks.

“We don’t have a penny to pay for (more) treatment. Our children are dying on their beds and we can’t do a thing,” Jadari said from his makeshift home of rushes and canvas in the hills of Hajjah district, one of Yemen’s poorest.

Jadari’s family was forced from their village by war. He is unemployed and medicine is not free.

Dengue is the world’s fastest-spreading mosquito-borne disease. It causes flu-like symptoms and a severe form of it can result in internal bleeding. There is no specific treatment and no vaccine available yet although one is being trialled.

Dengue infections around the world have increased dramatically in recent decades and many countries are seeing a surge in cases this year. The World Health Organization (WHO) this year named dengue one of the top 10 global public health threats.

Medical staff in Yemen said the disease is thriving among crowded populations of people displaced and weakened by war living in unsanitary conditions.

“You’ll find an entire camp of 600-700, all with dengue,” said Makiah al-Aslami, a nurse in Hajjah who spends most of the year treating acutely malnourished children.

With medical infrastructure in what was already one of the poorest Arab states decimated by war, clinics are struggling.

“In a family you could have 15 people with dengue. Who will treat them? They are weak, malnourished and have existing health problems. Their end is death,” Aslami said.

Her colleague, Doctor Akram Aqlan, said half to two thirds of his daily cases could be dengue. “Rain and swamps help mosquitoes spread and there is a lack of awareness about mosquito nets.”

The WHO said 59,486 suspected cases, including 219 deaths were recorded in the first 11 months of this year across Yemen, although cautioned that disease diagnosis and data collection is challenging given current conditions.

Some 150 km away in a clinic in the port city of Hodeidah, Mohammed Hashem holds his frail daughter’s hand, hoping her fever will subside.

“As a father, I have the right to worry about my daughter,” he said. “The fever hasn’t dropped. You can see here, it hasn’t gone down. They gave her some medication and she got a little bit better, only a little bit.”

Yemen’s latest conflict began in 2015 when a Saudi-led military coalition intervened to try to restore the internationally recognized government after it was ousted from power in the capital Sanaa by the Iran-aligned Houthi movement.