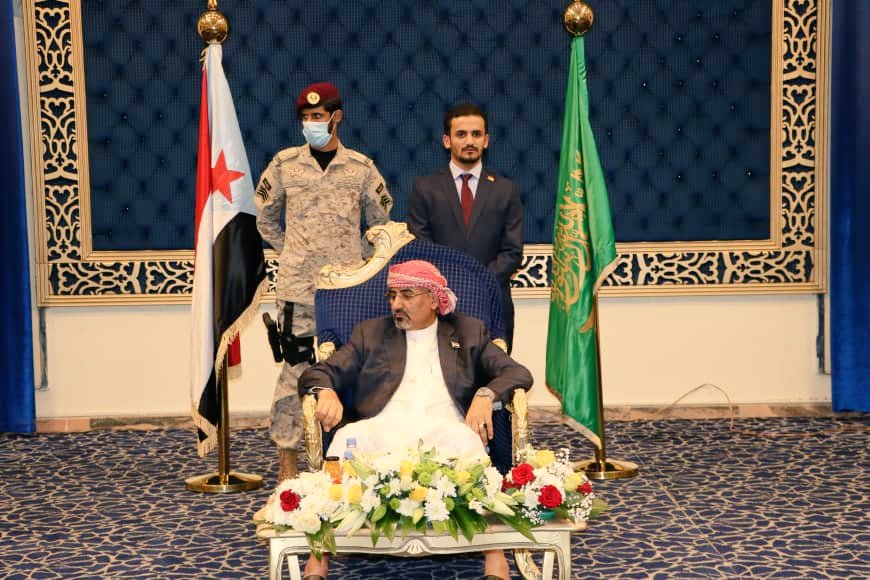 At a meeting with members of the southern communities in a number of Gulf states, Al-Zubaidi appeared surrounded by Saudi bodyguards and the flags of the former south Yemen republic and Saudi Arabia behind him.

The UAE-backed STC is calling for separating south Yemen from the north, taking advantage of a six-year civil war between the internationally recognised government and the Houthi Group and the Houthi takeover of the north.

The meeting was his first official activity since he arrived in Riyadh two months ago.

And it was the first time Saudi Arabia allowed raising the south flag by an official of the council, in a self-contradictory position towards the national unity of Yemen.

Observers argued the move was a serious escalation reflecting the size of the Saudi-UAE pressure on president Hadi and his government to make more concessions and accept the formation of a new government before implementing the military and security part in the Riyadh Agreement.

The government and the council have been meeting in Riyadh for months to find ways for implementing the agreement which was signed in November 2019.

There has been no progress on the talks amid widening disagreements over the implementation of the military and security part.

Some observers believe the Saudi move came after Hadi's government had turned down a request by Saudi crown prince Mohammed bin Salman to open communication channels for normalising ties with Israel.

Raising the separation 'south' flag at an official event in Riyadh implied that Saudi Arabia has decided to play openly within its attempts to completely subjugate the legitimate government, said political researcher Mohammed Al-Qadasi.

"Supporting the separation of the south will be an open option for Saudis to face Hadi's inflexibility and resistance of Saudi and UAE ambitions in the provinces of Mahrah, Socotra and Shabwa where Hadi has resisted plots despite his weak position," Al-Qadasi told Debriefer.

He ruled out that the latest Saudi move had something to do with the rejection of Hadi's government to normalise ties with Israel, he added.

Saudi Arabia may push Yemen to normalise with Israel like it has done with Bahrain in order to deal with mounting local and regional pressure preventing it from official normalisation with the Jewish state, Al-Qadasi said.

Saudi Arabia and the United Arab Emirates will not find a better servant than Al-Zubaidi and his council to pass evil projects in Yemen amid Hadi's insistence on saving some dignity which is preventing him from legitimising Saudi-UAE projects, he added.

The two gulf countries have been fighting the Houthis in support of Hadi's government since March 2015. In the past two years, their projects and plots have started to surface in southern and eastern provinces where the UAE has built large security and military units.

The UAE-backed forces have been fighting the government forces and so far captured the interim capital Aden, Socotra and some parts of other southern and southeastern regions.

Pro-STC activist, Wijdan Abdulkhaliq, said: "Saudi Arabia's position towards the separation of the south has changed after Saudi officials realised that separation has now become the option of all southern people and it is just a matter of time before it happens".